HO CHI MINH CITY, Vietnam, July 16, 2021 /PRNewswire/ — Vietnam-based media platform The Bureau Asia has been highly commended for its podcast entry in this year’s recently announced winners’ list for the My RODE Cast Competition in Australia. 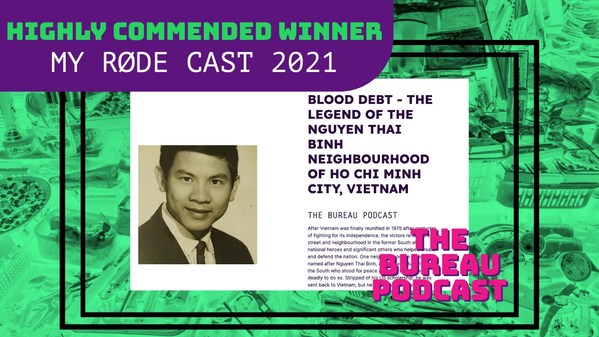 The podcast entry – Blood Debt: The legend behind the Nguyen Thai Binh neighbourhood of Ho Chi Minh City – was announced as one of 100 podcasts to be highly commended from more than 2,000 entries submitted worldwide to the organisers for judging by a panel of international podcasting experts.

The news was delivered via invitation-only voice chat room app, Clubhouse, on July 15.

Entrants were required to upload a one to two minute segment or teaser of their podcast on any topic and in any style, with a booty of RODE podcasting equipment valued at AUD50,000 up for grabs.

“The accolade is amazing,” says Matt Cowan, the founder of The Bureau Asia and producer of the episode. “To be recognised among such talented creators worldwide is a special feeling. We’re honoured and humbled – it’s a great achievement for a team of just two!“

“Let’s hope our win contributes to putting Vietnam-based content creators further onto the world map, especially as it’s a highly-competitive and challenging field to be in.”

Listen to the award-winning teaser HERE.

The episode delves into the intriguing history behind the man after which the neighbourhood is eponymously named.

After the end of the War in 1975, when Vietnam was officially reunified after centuries of fighting for its independence, the victors renamed streets, neighbourhoods and cities in the former South after national heroes and significant others who helped create and defend the nation throughout its history.

Nguyen Thai Binh was a South Vietnamese university student from the Mekong Delta who won a scholarship to study and work in the United States in 1968, shortly after the beginning of the Tet Offensive – a pivotal moment in the escalation of the Vietnam War, or what is known in Vietnam as the American War.

The experience opened his eyes to the devastation back in his country, and at the height of anti-war demonstrations in the United States, he became a beacon for peace on university campuses across the nation.

But this didn’t sit well with the US and South Vietnamese administrations.

Binh was stripped of his scholarship and sent back to South Vietnam with the prospect of facing disciplinary proceedings for his anti-war stance, but, in an unexpected twist, he never quite made it back on Vietnamese soil alive.

Listen to the full episode HERE.

“The episode is mostly about someone who stood for something, in this case peace, at a time when it was deadly to do so,” says Cowan. “While it’s almost 50 years since his death, Binh’s story remains timeless – he stood up for something he believed in, even though he knew he would probably pay the ultimate price.”

“The backdrop for the episode is also a really cool neighbourhood of Ho Chi Minh City that often gets overlooked as a destination by local and international tourists alike,” he continues. “There’s a fascinating, sometimes dark history on the streets here, but it’s emerging as a hip area with internationally-recognised dining venues, cool bars tucked away in French-colonial era buildings and some of the best street food to be found in the city.”

The Bureau Asia team is looking forward to receiving their prize of a RODE NT-USB Mini microphone in the coming weeks.

“The mic will come in very handy,” says Cowan, “because we have plenty of episodes in the pipeline in preparation for when international tourism to Vietnam returns.

“Our podcasts will be extremely useful and enlightening for travellers planning their trips before and during their stay here in Vietnam.”

About The Bureau Asia

The Bureau Asia is a Ho Chi Minh City based media platform that was established in 2018. Apart from telling stories about Vietnam and Southeast Asia, it creates and distributes digital marketing content for the hospitality, travel and lifestyle industries in the region. For media enquiries, email matt@thebureauasia.com

5 of My Favorite Transitional Outfits for Spring, Paired with Denim Shorts

Inside Seek: A New Platform That Lets You Shop Fashion From TV and Movies...

Is the viral ‘fox eye’ makeup trend racist towards Asians?