LAUSANNE, Switzerland, July 20, 2021 /PRNewswire/ — Germany has a long and formidable record in Olympic Equestrian Dressage. Since the team competition was first introduced in Amsterdam (NED) in 1928, when the German side pinned Sweden into silver and The Netherlands into bronze, they have won 13 of the 20 Olympic team contests. And it’s looking very much like gold number. 14 is just around the corner. 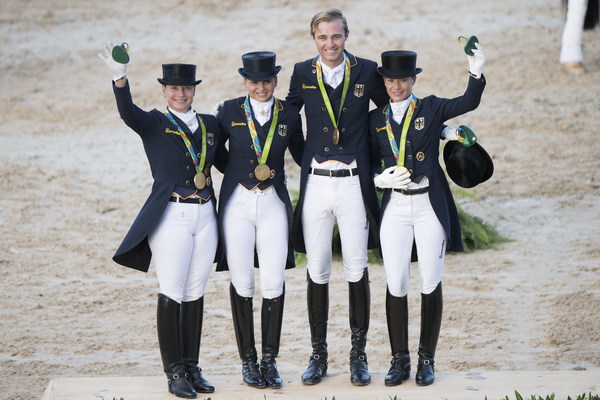 Team Germany arrive at the Tokyo 2020 Olympic Games as defending champions and strong favourites to do it all over again. © FEI/Richard Juilliart

The loss to Great Britain at London in 2012 was the only blip in an otherwise seamless run that began in Los Angeles in 1984 when the great Reiner Klimke and Ahlerich led the victory gallop. Despite all the disruption of the last 18 months due to the Covid-19 pandemic and the Equine Herpes Virus (EHV-1) outbreak in mainland Europe, Team Germany arrive at the Tokyo 2020 Olympic Games as defending champions and strong favourites to do it all over again.

Isabell Werth heads the line-up with mare Bella Rose and holding the World number one slot. Underpinning the sheer strength of the German challenge, she will be joined by World numbers two and four, Jessica von Bredow-Werndl with TSF Dalera BB and Dorothee Schneider with Showtime FRH. With Helen Langehanenberg and her mare Annabelle in reserve, they seem like an unstoppable force.

However, the three-per team format introduced for this year’s Games could prove highly influential. One off day for just one team member and the story could be very different indeed.

At the Rio 2016 Olympic Games, Great Britain claimed silver and The Netherlands took team bronze. This time around the British send the dynamic duo of Charlotte Dujardin and Carl Hester once again, but both on relatively unexposed horses.

Edward Gal with Total US and Hans Peter Minderhoud with Dream Boy headline the Dutch team, Patrik Kittel (Well Done de la Roche) leads the Swedish contingent and Steffen Peters (Suppenkasper) will be a strong anchor for Team USA. Meanwhile Team Belgium will be making a little bit of Olympic history as they make their first appearance since 1928.

How Did Your Favourite Brands Score in This Year’s Ethical Fashion Guide? – Broadsheet

My confidence sky-rocketed after I started using this exfoliating liquid

Amy Beeck, Perth’s Coolest Fashion Guru Who Schedules Each Day Down to the Minute...