TOKYO, July 22, 2021 /PRNewswire/ — Technology that, within five seconds of a point-scoring play in a tournament, will show on a television screen a 360-degree replay highlight video. For the viewer, the highlight video is just as immersive as the original footage, because it can be seen from multiple angles. The technology is 4DReplay, a real-time replay video system that is popular among sports fans worldwide. 4DReplay‘s ability to show not only the exact moment that a point was scored, but even the sweat on the athlete’s face and broadcasting of games/tournaments from many different angles. 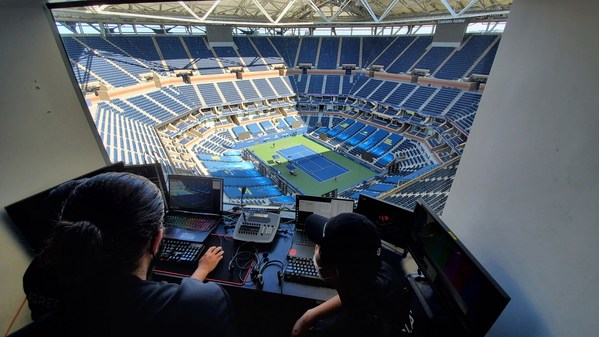 4DReplay, a technology developed by 4DREPLAY, a member of Born2Global Centre, a Silicon Valley-based global media technology startup, can capture and replay key moments.  For example, a 360-degree rotating view from sporting events. The principle is simple: 50 to120 special cameras that are installed at the stadium or venue, filmed in real-time, detail videos of an athletes’ every move. Then these events, without rendering, are immediately edited at the stadium’s operating console and played during the live broadcast.

It is due to its ability to render exciting moments from tournaments or matches that spectators want to see again and again which creates an “even more real” experience than the original live footage. 4DReplay is currently used for diverse sporting events, such as the broadcast of a San Francisco Giants game (MLB) in 2017. 4DReplay is also used today in live broadcasts of global competitions, including the NBA, NHL, PGA, LPGA, Australian Open, and UFC.

Of note, 4DReplay will be used starting on July 23, at the world’s largest sporting event, which is held this year in Tokyo. 4DReplay, which has been installed at 11 stadiums, will be used to film approximately 50 sporting events and is expected to produce many dramatic videos, including the opening ceremony at Japan National Stadium. Exciting performances by athletes for such sports as athletics, artistic gymnastics track, golf, volleyball, 3X3 basketball, sport climbing, skateboarding, BMX racing, Taekwondo, wrestling, and Judo. For Taekwondo and wrestling, 4DVar, an official game judging system, will be used. For Judo, the video solution 4DLive will be used as a means of supplementing the sportscaster’s commentary.

Hongsu Jung, CEO of 4DREPLAY, said, “The prolonging of COVID-19 and the resulting consistent hosting of sporting events without on-site spectators is making viewers even more nostalgic for the feeling of watching a game offline in person. The broadcasting company personnel who are responsible for streaming the world’s biggest sporting event have the added responsibility of conveying the atmosphere on-site to fans watching from home so that fans feel like they are physically present. 4DReplay features each athlete’s performance in a 360-degree view, which allows us to show every movement made by the world’s top athletes—the outcome of years of sweat and tears—in a high degree of detail that we believe will impress viewers. For team events, performances will be shown for different angles per team. Our videos will help viewers to better understand a particular sport through their multi-angle portrayal of athletes’ momentary decisions and performance.”

4DREPLAY is a unique video-making company based in Silicon Valley, San Francisco. 4DReplay, a 360-degree perspective video-making solution; 4DVar, a judgement system that acts as a “real-time” referee; and 4DLive, a mobile gesture-based, real-time, free viewpoint, multi-view video media service, are being applied to professional sports, but also an increasingly broad range of entertainment genres, including movies, television dramas and music videos.

Born2Global Centre is a full-cycle service platform for global expansion. Since its inception in 2013, Born2Global has been setting the standard for a successful startup ecosystem as the main Korean government agency under the Ministry of Science and ICT. Born2Global has expanded and transformed startups to be engaged, equipped and connected with the global market.

How to Get Back Into Running After a Long Break

Down to Your Skivvies, Lingerie We’re Loving