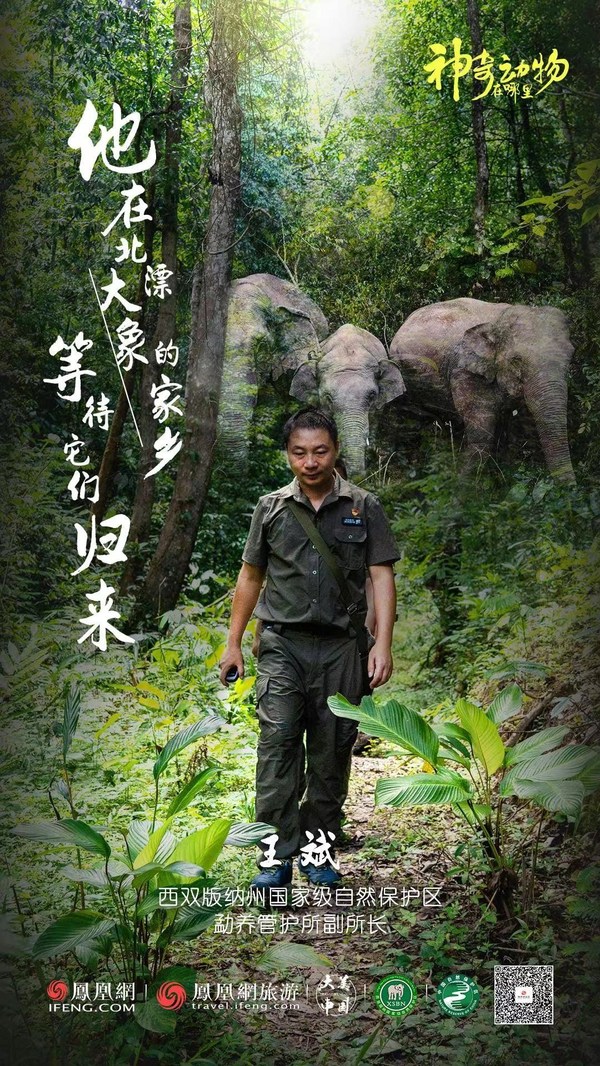 The now famous elephant herd had been living in Mengyang, where Wang Bin works. He is the deputy director of the Mengyang Management and Conservation Office of Xishuangbanna National Nature Reserve.

“This elephant family is known as ‘short-nosed’ because their noses are shorter than those of other elephants. There are 16 elephants. They lived in the Mengyang area of Xishuangbanna National Nature Reserve, where my colleagues and I often saw them at the Wild Elephant Valley monitoring point. The most notable feature of the family is that they’re active, but gentle and non-aggressive.” Wang said excitedly to travel.ifeng.com.

For the short-nosed family, home is the Xishuangbanna National Nature Reserve in Yunnan, located on the southwestern border of China. It is the largest tropical primitive forest area in China, and is composed of five sub-reserves —Mengyang, Menglun, Mengla, Shangyong, and Mangao – with a total area of about 242,500 hectares, covering 12.68% of the entire prefecture. Thanks to conservation projects, the wild Asian elephant population has been sheltered.

It was in 2005 that Wang had his first close encounter with wild Asian elephants. During a routine patrol in Shangyong sub-reserve, he and six observers entered some dense woods. As they approached the river, a scream came from the nearby bushes. Wang panicked. He looked back and saw that the guide from the Hani tribe had already run into the river. Only then did he realize what had happened, and he hurried into the water.

“What we learned was that it was a roar from a female elephant who had just experienced dystocia and lost her baby. The sound was filled with anger and sadness, and came from only 10 meters away. ” He realized they have similar emotions to humans, feeling a sense of loss after the death of their loved ones. They are the owners of the rainforest.

After that incident, Wang and his colleagues closely monitored the activities of Asian elephants in the wild. They carefully recorded the time and place of each spotting, took pictures of the herd, and also assisted scientific institutions with research.

When Wang saw a small baby elephant lying with its mother during their lunch break, he felt deeply moved. “Elephant moms often take their babies to forage and play in the woods. After the meal, kids will bathe in the river and play with each other. They are just as cute as children.”

Every year, he and his colleagues go to every village to conduct safety education, distribute safety manuals to the villagers, and cooperate with environmental groups to carry out safety popularization courses in local schools.

Thanks to the efforts of Wang Bin and his colleagues, incidents of human-elephant conflict in the reserve have been significantly reduced, poaching no longer occurs, and the population safety of wild Asian elephants has been guaranteed. According to Wang Bin’s observations and statistics, there are currently about 70-90 wild Asian elephants living in the Mengyang sub-reserve, and the number of wild Asian elephants in China has increased from over 170 in the early 1980s to more than 300 today.

The good news is that the elephant herd is already on its way home. The journey isn’t going entirely smoothly, but Wang Bin is still very optimistic about their future.

Coachella is reportedly postponed due to the coronavirus