GUANGZHOU, China, July 23, 2021 /PRNewswire/ — Buoyed by a recovery in consumer confidence, NYSE-listed lifestyle retailer MINISO today announced a 72.93% year-on-year increase in sales revenue in the United States during the first half of 2021. The budget retailer revealed that the transaction value per customer rose from USD$14.30 in the first two months of this year to USD$15.57 in May and June, a trend reflecting the restoration of confidence among American consumers as vaccination rates advanced. 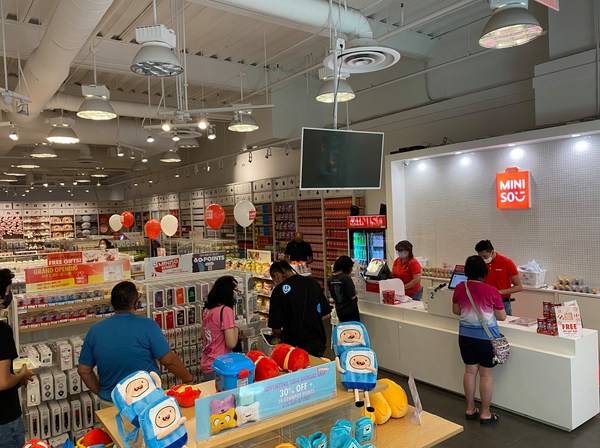 “Our improved performance in the United States reveals the underlying resilience of local economic fundamentals,” said MINISO’s Vice-President of International Business Vincent Huang. “As the economy re-opens, consumers sitting on a pile of savings will spend on experiences as well as goods that a brand like MINISO offers. We stand ready to ride the wave of a revitalized US economy by bringing MINISO to the homes of the American people.”

Recent US economic data indicates a promising outlook for the US economy. During the first three months of the year, the country’s GDP grew by 6.4% while consumer spending which accounts for more than two-thirds of economic activity rose by 11.4%. Meanwhile, business investment grew at a robust 11.7% during the same period.

Capitalizing on the rapid market recovery, MINISO recently relocated its North American headquarters from Los Angeles to New York City to strengthen its presence along the east coast. Its New York City office, which will oversee both US and Canada operations, will host sales, marketing, and administrative duties, while corporate branches will remain open in Los Angeles, Vancouver and Toronto. These will serve logistics and store front retail.

MINISO’s strategic shift will eventually facilitate the brand’s intention to expand to the country’s central region. Their growing physical presence in the United States will be felt from the second half of 2021 as the brand continues an international rapid acceleration that persisted even during the pandemic, at an average rate of one store opening a day.

Over the next six months, new MINISO stores will open in major cities, some featuring a new look in-store. In addition, MINISO has plans to release products reflecting North American consumer preferences. These include the brand’s range of dolls, furniture as well as its hugely successful IP collaborations such as Coca-Cola, and the Minions.

MINISO is a lifestyle product retailer, offering high quality household goods, cosmetics, food, and toys at affordable prices. Since its first store opened in Guangzhou in 2013, MINISO has opened more than 4,587 stores in over 95 countries and regions. With a focus on sleek design and fun trends, its mission is to enable everyone to enjoy life’s little surprises.

Kate’s Picks: The 22 Pieces That Are the Base of My Wardrobe