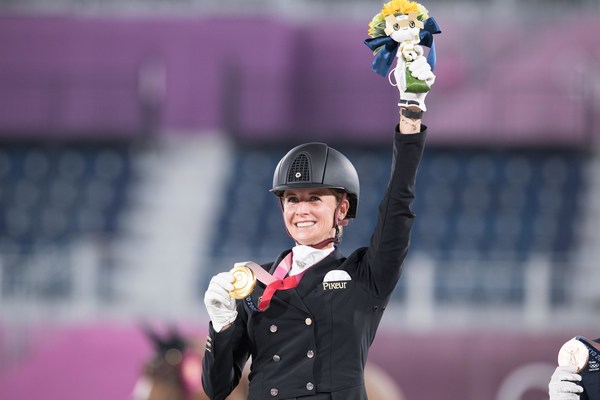 Everything about the Tokyo 2020 Olympic Games has been a journey into the unknown. But there was a ring of familiarity combined with a spirit of great sport when Germany’s Jessica von Bredow-Werndl claimed the Individual Dressage title with the lovely mare TSF Dalera at Baji Koen Equestrian Park tonight where compatriot Isabell Werth had to settle for silver and Great Britain’s Charlotte Dujardin took the bronze. It was the perfect end to four fabulous days of competition in this first of the three Olympic equestrian disciplines.

The new champion was always on song, throwing down the biggest score in the opening Grand Prix and then setting a new Olympic record in yesterday’s Grand Prix Special to secure the team title for her country. Tonight she produced another performance that oozed such class and elegance that once she left the arena, with a score of 91.732 on the board, it seemed impossible she could be beaten.

Werth is a longtime legend with more Championships and Olympic medals in her trophy cabinet than any other equestrian athlete. Never the shrinking violet, she is not used to playing second fiddle to her own team-mates and with her much-loved mare Bella Rose she produced one of her typically spellbinding performances that kept onlookers glued to every move. However when her score of 89.675 was posted Von Bredow-Werndl burst into tears and fled back to the stables, overcome by the possibility that Olympic gold was now within reach.

Second-last to go was defending double Olympic champion Charlotte Dujardin from Great Britain, but not with the now-retired superstar Valegro with whom she dominated the sport in recent years but instead with a 10-year-old gelding who knows nothing about the world. Dujardin’s little chestnut, Gio, had previously only ever competed at one international show, at Hagen in Germany in April. Unaware of the level of exposure he was now getting however, the little chestnut gave his all for a score of 88.543 which put him in bronze medal position.

Only the last of the German riders, Dorothee Schneider, could change the podium places now and under normal circumstances she might well have ensured it was an all German one but it didn’t happen when her horse, Showtime, was right off form.

Every time Meghan Markle has recycled an outfit

A judge said a teen accused of rape deserves leniency because he came from...

She Means Business,She Must Have Passion: Founder of i understand Reflects on Using Passion...