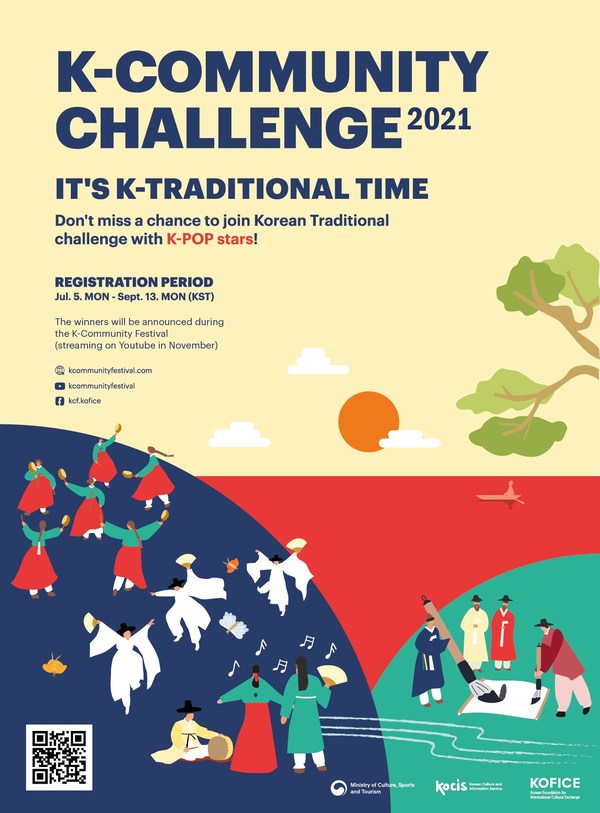 “K-Community Challenge” participation is available for any K-Community inside and outside of Korea. It is divided into four sections: Seoye (Korean Calligraphy), Sogochum (Small Drum Dance), Hallyangmu (Prodigal Man Dance) and Minyo (Korean Folk Song), and anyone can apply through the official website.

In particular, guide videos with experts of each genre and popular K-POP artists, MONSTA X, LOONA, Weki Meki and WEi, are provided, for the purpose of inducing K-Community to participate. There are also videos of K-POP artists learning these aspects of culture from different mentors, with Korea’s main scenery and landmarks as background.

Applicants will watch tutorial and guide videos and make their own challenge video no more than 90 seconds long, upload it on their social media, and submit the link using the application form provided in K-Community Festival’s official website. The application period is from July 5 to September 13, and the winning team will receive traditional clothing and other instruments for later performances as prize.

The winning teams will be announced at “K-Community Festival (Online)” on November 6. K-POP artists who took part in this challenge will introduce Korean traditional performances and will have interactive time with the winners.

K-Community Challenge’s schedule, application method, and other specific matters can be found at the official website (www.kcommunityfestival.com).