HONG KONG, July 30, 2021 /PRNewswire/ — Across the globe, change-makers and innovators are working tirelessly to find sustainable solutions and help shape a better tomorrow. In a 30-minute special, CNN’s ‘Going Green‘ meets the individuals fighting to solve some of the biggest environmental challenges we face. 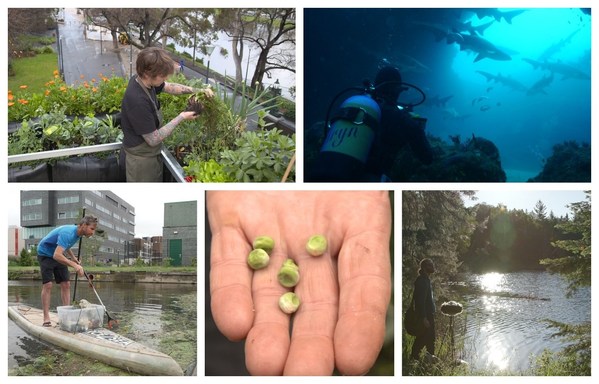 Sitting right in the heart of Melbourne, Joost Bakker’s ‘Greenhouse’ started as a crazy idea: an 87-square-metre, zero-waste home that could be certified organic. Today, the closed-loop house is a reality, and it comes with aquaponics systems, micro-farms and a rooftop garden all powered entirely by renewable energy.

Sound recordist Matt Mikkelsen has been capturing something rather elusive in our industrialized world: quiet. Mikkelsen is a volunteer for Quiet Parks International, a grassroots movement set up to reclaim calm and protect natural environments from man-made noise. CNN joins Mikkelsen as he sets out to capture the natural soundscapes of Boundary Waters, Minnesota – a place of untouched natural beauty that he hopes will be preserved for future generations.

With an ever-growing global population and climate change threatening our environment, food scarcity has become an increasingly pressing issue. In Wales, UK, ‘seed detective’ Adam Alexander thinks the answer lies in preserving the genetic diversity of our crops. An experienced horticulturalist, Alexander has dedicated his life to collecting and saving rare and endangered vegetable varieties.

Merijn Tinga, also known as ‘The Plastic Soup Surfer,’ is one of the Netherlands’ leading figures in the fight against plastic pollution. The Dutch biologist-turned-surfer creates boards made out of plastic waste and uses them for campaigns that highlight global issues around plastic pollution. Tinga’s work contributed to the Dutch government’s decision to introduce a bottle deposit return scheme for small plastic bottles that was implemented early this month.

Sharks may terrify us, but they are vital to life on our planet. They are predators at the apex of the food chain and their numbers keep our marine ecosystem in balance. South African scientist Ryan Daly has dedicated his life to studying these mysterious creatures. By using state-of-the-art tagging and tracking technology, he hopes to understand the biology of the species before it is too late.

CNN’s portfolio of news and information services is available in seven different languages across all major TV, digital and mobile platforms, reaching more than 475 million households around the globe. CNN International is the number one international TV news channel according to all major media surveys across Europe, the Middle East and Africa, the Asia Pacific region, and Latin America and has a US presence that includes CNNgo. CNN Digital is a leading network for online news, mobile news and social media. CNN is at the forefront of digital innovation and continues to invest heavily in expanding its digital global footprint, with a suite of award-winning digital properties and a range of strategic content partnerships, commercialised through a strong data-driven understanding of audience behaviours. CNN has won multiple prestigious awards around the world for its journalism. Around 1,000 hours of long-form series, documentaries and specials are produced every year by CNNI’s non-news programming division. CNN has 36 editorial offices and more than 1,100 affiliates worldwide through CNN Newsource. CNN International is a WarnerMedia company.

Morning Moments: Setting the Tone for Your Day