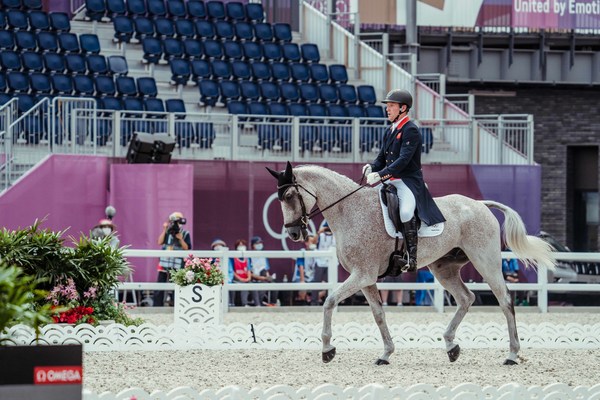 World number one, Oliver Townend, helped Great Britain take the lead with the best individual score on the first day of the Dressage phase of Eventing at the Tokyo 2020 Olympic Games in Baji Koen today. (FEI/Christophe Taniere)

World number one, Oliver Townend, gave the British team the best possible start when taking the individual lead as the Dressage phase kicked off equestrian Eventing at the Tokyo 2020 Olympic Games in Baji Koen today.

Going second in the first of today’s two sessions, with a further 20 horse-and-rider combinations to go tomorrow morning, the 38-year-old athlete who is a triple European team gold medallist, produced what he described as “a very safe test” for a score of 23.6 with the Irish-bred grey, Ballaghmor Class.

Team-mate, Laura Collett, then backed that up with a score of 25.80 for overnight fourth place individually with London 52, but she wasn’t overly pleased with her own performance. However her result was plenty good enough to secure pole position for her country this evening.

It’s a fascinating leaderboard with two-thirds of the dressage competitors now completed. Lying second are Team Sweden, with the hosts from Japan in third and China in fourth place. Few would have expected Germany to be lying fifth and New Zealand, France, Switzerland, USA and Australia stacking up behind them in the field of 15 nations.

A brilliant ride by China’s Alex Hua Tian with Don Geniro brought him closest to Townend’s leading score when putting 23.90 on the board for individual second place while Germany’s Julia Krajewski and Amande de B’Neville lie third on 25.20.

The short action-packed dressage test, specially created for these Olympic Games, takes just 3.5 minutes to complete and, underlining the quality of the field, a total of seven combinations scored below 30 during this morning’s first session. Three more joined that elite group as the day progressed and amongst them was India’s Fouad Mirza riding the experienced 15-year-old gelding Seigneur that competed so successfully for Germany’s Bettina Hoy. “I’m so lucky to ride such a great horse, he’s a gentleman in every sense, kind and honest”, said the athlete who is only the third rider from his country to compete in Olympic Eventing.

Overnight there were some changes to the teams, with both Australia’s Stuart Tinney (Leporis) and Ireland’s Cathal Daniels (Rioghan Rua) withdrawing. Tinney has been replaced by Kevin McNab (Don Quidam) and Daniels by Austin O’Connor (Colorado Blue).

Images available on FEI Flickr for editorial use only.