TOKYO, Aug. 2, 2021 /PRNewswire/ — Townend is back on top and Britain holds onto lead after Cross Country day by Louise Parkes 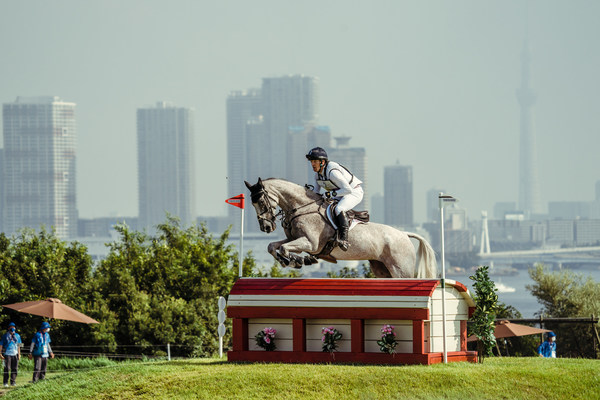 Great Britain’s Oliver Townend is back in pole position individually and the British team maintains the lead after today’s Cross-Country phase of Eventing at the Olympic Games Tokyo 2020. (FEI/Christophe Taniere)

World number one, Great Britain’s Oliver Townend, regained the individual lead he established on the first day of the Dressage phase with a perfect ride on Ballaghmor Class on Cross Country day of Equestrian Eventing at the Olympic Games Tokyo 2020 at Sea Forest today. And with foot-perfect performances from team-mates Laura Collett (London 52) and Tom McEwen (Toledo de Kresker), the British team go into tomorrow’s final Jumping phase with four fences in hand over their nearest rivals.

His individual lead had been snatched away by Germany’s Michael Jung yesterday morning as the Dressage phase drew to a close, but the double Olympic champion lost his grip on the top spot today when triggering the frangible device at the corner element of fence 14, the Lone Tree Moguls, on an otherwise faultless tour of the track with Chipmunk. The German National Federation lodged a protest against the resulting 11 penalties immediately after the cross country, but the protest was dismissed by the Ground Jury.

German pathfinder Julia Krajewski made no mistake with Amande de B’Neville, however, and goes into tomorrow’s final phase in silver medal spot. But the German team have dropped from second to sixth and look well out of medal contention.

In stark contrast, both Australia and France enjoyed a superb day with spectacular performances that lifted them into silver and bronze medal spots. Lying sixth after Dressage, the Australians added just the 2.8 time penalties picked up by Kevin McNab and Don Quidam when both Shane Rose (Virgil) and Andrew Hoy (Vassily de Lassos) both kept a clean sheet.

The French are defending the Olympic team title, but things hadn’t been going their way until today when Christopher Six (Totem de Brecey) added just 1.6 time penalties to his scoreline, Nicolas Touzaint (Absolut Gold) were just over the time-allowed of 7.45 minutes to add 0.4 and anchorman Karim Florent Laghouag (Triton Fontaine) was clear inside the time. On a running score of 97.10, they are just over a single penalty point adrift of the Australians when the action resumes tomorrow, trailed by New Zealand (104.00) in fourth, USA in fifth (109.40) and Germany in sixth (114.20).

Images available on FEI Flickr for editorial use only.

Levi’s is launching a capsule collection with Stranger Things

Vogue is giving you the chance to get your hands on a Rihanna-approved eye...