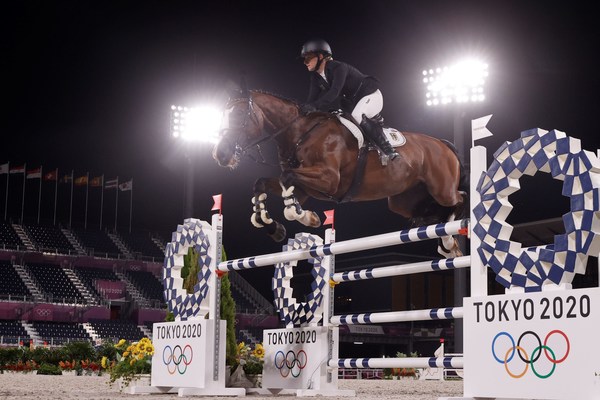 Britain’s Oliver Townend, Laura Collett and Tom McEwen were in a league of their own when cruising to Eventing team gold at the Tokyo 2020 Olympic Games at Baji Koen Equestrian Park. This was their country’s fourth team title but it’s been a very long wait since Richard Meade, Mary Gordon-Watson, Bridget Parker and Mark Phillips stood top of the podium a full 49 years ago in Munich in 1972. Australia took the silver tonight, while the defending champions from France claimed the bronze.

And Germany’s Julia Krajewski has entered the equestrian history books as the very first female athlete to take the Individual Olympic Eventing title. When the Games last took place in Tokyo back in 1964 the USA’s Lana du Pont was the first woman to compete in the three-day event, so female firsts and the Tokyo Olympics seem to be intrinsically linked.

In the battle for the remaining Individual podium places it was Britain’s Tom McEwen who took the silver while Australia’s Andrew Hoy clinched the bronze. Hoy’s result is nothing short of sensational because the three-time team gold medallist has a staggering record of participation at eight Olympic Games dating all the way back to Los Angeles in 1984. He was only 25 years old back then, and today at the age of 62 he’s as competitive as ever.

Tom McEwen paved the path to Britain’s team victory with a superb round from Toledo de Kresker over the first of Santiago Varela’s beautifully decorated tracks tonight. However team-mate Laura Collett had a scary moment when London 52 baulked at the water tray at fence four and scattered poles everywhere before regaining his equilibrium.

The Individual finale was truly gripping as the top-25 slogged it out. Japan’s Kazuma Tomoto collected just 0.4 penalties when seventh-last to go with the lovely Vinci de la Vigne, and when France’s Christopher Six faulted at the last of the triple combination on the new course Tomoto began to move up the order.

Colletts’s bay gelding left the last two fences on the floor but when Hoy followed with a clear the top three had absolutely no breathing space. Last in, Krajewski could have been completely overwhelmed but held her nerve to deliver a fabulous round from the mare she calls Mandy. She would take the top step of the podium and her place in equestrian history, ahead of McEwen and Hoy in silver and bronze.

I look like Meghan Markle, and here’s how I get her glowy skin