HONG KONG, Aug. 4, 2021 /PRNewswire/ — Insilico Medicine, a global company specializing in the applications of the next-generation machine learning technologies for drug discovery and development, announced today that its AI-powered drug discovery platform had delivered the preclinical candidate (“PCC”) for kidney fibrosis. The preclinical candidate has the desirable pharmacological properties, pharmacokinetic profile, and demonstrated highly promising results in in-vitro and in-vivo preclinical studies. Insilico Medicine is working to advance this program to clinical trials. 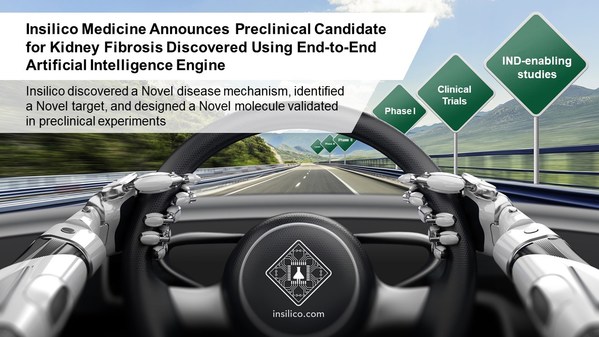 “Chronic kidney disease affects 10 percent of the world’s population, and, unfortunately, it has no cures or efficacious drugs on the market,” said Alex Zhavoronkov, Ph.D., founder and CEO of Insilico Medicine. “Kidney fibrosis is the common pathogenesis in the progression of chronic kidney disease (“CKD”) and is a major unmet medical need. Approximately 850 million people worldwide, almost a billion, have kidney disease often being driven by or associated with kidney fibrosis. We are very excited to see that our AI-powered drug discovery engine has managed to uncover novel targets and novel molecules that have demonstrated preclinical efficacy in kidney fibrosis. We also used our InClinico engine to produce the actuarial models for the multiple diseases driven by kidney fibrosis, and are very excited about the clinical prospects of this program.”

According to the Centers for Disease Control (“CDC”), more than 1 in 7, or 15% of US adults or 37 million people, are estimated to have CKD. It leads to the gradual loss of kidney function over a period of several months to several years. While there are many causes of CKD including diabetes mellitus, hypertension, and glomerulonephritis, the origin of the disease is often unknown and is referred to as idiopathic.

Insilico Medicine achieved a great breakthrough in February 2021 when it announced that its AI system identified a novel drug target and novel compound to treat idiopathic pulmonary fibrosis (“IPF”), which is another fibrotic disease affecting patients worldwide with high unmet medical needs. What also made the discovery noteworthy was that this was achieved within 18 months and a $2.6 million budget.

Repeating that success, Insilico Medicine leveraged its PandaOmics to develop the target hypothesis for kidney fibrosis, and used Chemistry42 to generate compounds with drug-like properties. The compound that markedly inhibited the development of fibrosis and significantly improved myofibroblast activation are critical for tissue repair and wound healing.

Insilico Medicine plans to complete the IND-enabling studies for this program in 2022.

“A good drug is easy to make and nontoxic, which affects diseases we are worrying about. But it is very difficult. However, this  is where Insilico Medicine has been such a breakthrough. From my perspective, Insilico Medicine will affect the whole biopharma industry. People will witness how they design new drugs for new diseases with much less cost than traditional methods , but also much quicker,” said Michael Levitt, Nobel Laureate in Chemistry, 2013 and member of Insilico Medicine’s Science Advisory Board.

Founded in 2014, Insilico Medicine has raised more than $300 million. It plans to use the proceeds received from Series C financing completed in June to accelerate the development of drug candidates for kidney fibrosis and IPF and leverage its AI-powered end-to-end solutions for discoveries of more drug candidates.

Insilico Medicine, an end-to-end artificial intelligence-driven drug discovery company, developing artificial intelligence platforms that utilize deep generative models, reinforcement learning, transformer, and other modern machine learning techniques for novel target discovery and generation of novel molecular structures with desired properties. It is developing breakthrough solutions for the discovery and development of innovative drugs for cancer, fibrosis, infectious diseases, autoimmune diseases, and aging-related diseases. Since 2014, Insilico Medicine established strategic collaborations with over 30 pharmaceutical and biotechnology companies and academic research groups in the United States, Europe, China, Japan and other countries and regions, and launched multiple internal R&D pipelines for novel, difficult and previously undruggable targets. It also established a collaboration with Syngenta to develop and apply AI to sustainable agriculture. Since its inception, the company has raised over $300 million from reputable financial, biotechnology, and information technology investors.

It’s Time to Believe: Invest in the Possibility of YOU