SINGAPORE, Aug. 5, 2021 /PRNewswire/ — Enterprise Asia, the organiser of the prestigious fifteenth Asia Pacific Enterprise Awards (APEA) 2021 Regional Edition is pleased to recognise 59 exceptional award recipients who have exemplified excellence and perseverance in this unprecedented period. The APEA awardees have proven resiliency and accelerated tremendously to overcome the unprecedented economic conditions wrought by the global pandemic. 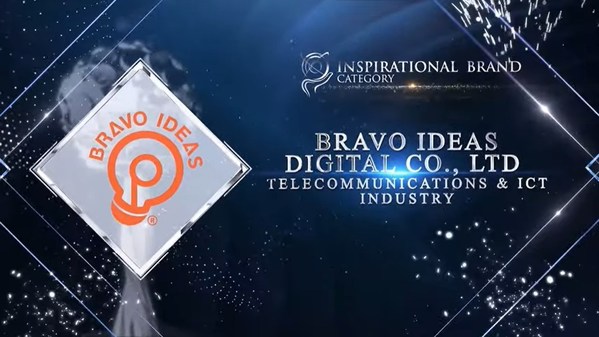 The APEA, an initiative by Enterprise Asia, the region’s leading NGO, is the largest regional recognition and acknowledgement programme for trailblazers in the business community. APEA prides itself as a testament to the commitment, aspiration, and true entrepreneurship. With over 800 nominations received each year, and about seven percent were commended to the most deserving for recognition. This year, an impressive number of 130 finalists from 15 countries were up for consideration in the final round of judging and only 59 were crowned as award recipients.

Bravo Ideas started patenting “See now, Buy now” Live-streaming technology in 2012 and an “invention patent” was issued to Taiwan, Mainland China, United States, the European Union, Japan, South Korea, Singapore and Indonesia. To popularise the technology in Taiwan, Bravo Ideas established its own Live-streaming eCommerce platform, called Ishowlife (www.ishowlife.com) in 2018; and since then, Bravo Ideas has held more than 15,000 live sessions. Ishowlife is now the largest Live-streaming eCommerce platform in Taiwan. It’s also worth mentioning that Bravo Ideas is the only one in the world that can use the “See now, Buy now” patented technology on FB, Twitter, Line, Wechat and WhatsApp.

In addition, Bravo Ideas currently partners with more than 600 influencers / KOL and uses “See now, Buy now“ technology while streaming lively in Ishowlife, as well as Facebook, Twitter, Instagram, and WhatsApp. Through such cooperation, Bravo Ideas achieved US$36,000,000 profits last year and for 2021, Bravo Ideas plans to increase the number of influencers/KOL to 1000 and make everyone in Taiwan know the brands “Bravo Ideas” and “Ishowlife”.

Enterprise Asia is a non-governmental organisation in pursuit of creating an Asia that is rich in entrepreneurship as an engine towards sustainable and progressive economic and social development within a world of economic equality. Its two pillars of existence are investment in people and responsible entrepreneurship. Enterprise Asia works with governments, NGOs and other organisations to promote competitiveness and entrepreneurial development, in uplifting the economic status of people across Asia and in ensuring a legacy of hope, innovation and courage for the future generation. For further information, visit www.enterpriseasia.org.

Launched in 2007, the Asia Pacific Enterprise Awards is the region’s most prestigious awards for outstanding entrepreneurship, continuous innovation and sustainable leadership. The Award provides a platform for companies and governments to recognise entrepreneurial excellence, hence spurring greater innovation, fair business practices and growth in entrepreneurship. As a regional award, it groups together leading entrepreneurs as a powerful voice for entrepreneurship and serves as a by-invitation only networking powerhouse. The program has grown to encompass 14 countries and markets all over Asia. For more information, visit: www.apea.asia

Have a Hot Date? Let Us Dress You!