TOKYO, Aug. 9, 2021 /PRNewswire/ — It was a tough day at the office for many of the nations competing in the Team Jumping Qualifier at the Tokyo 2020 Olympic Games in Baji Koen Equestrian Park today. But for Team Sweden it was just another walk in the park. 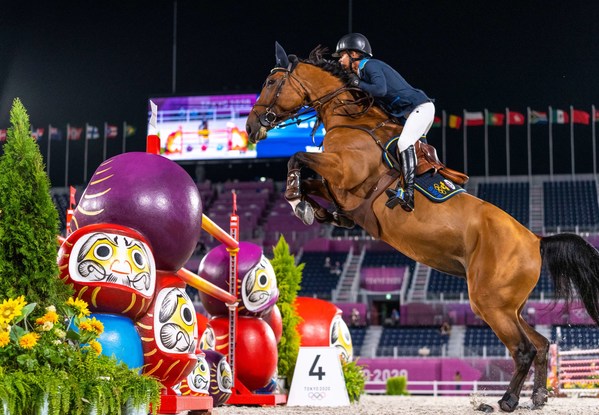 Malin Baryard-Johnsson and Indiana produced one of the three clear rounds that put Sweden at the top of the leaderboard in tonight’s Team Jumping Qualifier at the Tokyo 2020 Olympic Games in Baji Koen Equestrian Park. (FEI/Arnd Bronkhorst)

Since the action began on the first day of the Individual competition last Tuesday, Henrik von Eckermann’s King Edward, Malin Baryard-Johnsson’s Indiana and Peder Fredricson’s All In have not lowered a single pole.

It will be a whole new competition when the action resumes in tomorrow’s Team Final where the top-10 teams from tonight’s qualifier will battle it out once again, all starting on a zero score. But the Swedes look super-confident ahead of that showdown in which they will be challenged by Belgium, Germany, Switzerland, USA, France, Great Britain, Brazil and The Netherlands.

A number of countries made a dramatic exit, including Japan. Daisuke Fukushima and Chanyon, who finished Individually sixth, picked up eight faults when first to go for the host nation, but when Koki Saito and Chilensky were withdrawn that dashed their chances.

Then Irish pathfinder Shane Sweetnam and Alejandro fell at the water-tray vertical at fence 10. They left the arena unscathed, but Sweetnam was devastated for his team and for the horse who is normally so reliable.

When the second rotation of riders got underway Israel’s Teddy Vlock took a fall at the previous liverpool oxer. His 11-year-old mare had already refused at the second fence and had two fences down along the way. Vlock was examined by medics after walking out of the arena and was cleared to go back to his hotel, but knowing that his country was now also out of the medal race.

At the other end of the spectrum the Swedes were just waltzing home with effortless ease. The Belgians and Germans also looked very comfortable.

Switzerland finished with 10 on the board, the USA with 13, the defending champions from France with 15, and Great Britain racked up 17. The final three teams to make the cut were Brazil who collected 25 faults, The Netherlands who picked up 26 and Argentina who finished with 27 and squeezed Egypt out of the top 10.

It won’t be long before the Tokyo 2020 Olympic Team Jumping champions are crowned.

Inside the making of Game of Thrones’s final season costumes