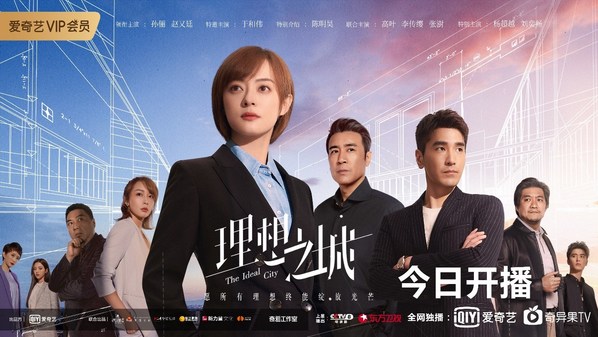 An adaptation of Ruo Hua Ran Ran’s workplace novel Su Xiao’s War, The Ideal City had already attracted attention during production, with some 1.5 million iQIYI subscribers indicating interest in it following the announcement of its release date.  Enthusiasm only increased as the series aired – hashtags for the show on China’s Twitter-like social media platform Weibo was viewed over 1 billion as of August 23.

The drama depicts the journeys of young architects, striving to forge their own paths in the workplace. With its honest portrayals of contemporary social issues such as the struggles of “Shanghai drifters” (young people who come to Shanghai for work) and the “007 work schedule” (working from midnight to midnight, seven days a week), the series is a salute to young people who stay true to their aspirations. The series’ protagonists share the mantra that “No matter how far life pushes me down, I can always bounce back with time.”

The Ideal City features a strong cast and crew. Director Liu Jin won the Magnolia Award for Best Director with the TV series White Deer Plain and has also received critical acclaim for works such as The Cliff, One Servant of Two Masters, and The Informant. Chief Story Editor Wu Zhaolong was the chief planner of The Era of Emperor Yongzheng, and has also produced several successful major films and TV series.

China’s burgeoning film and television industries show strong demand for original content that features realistic themes, creative depictions, and diverse voices. In the future, iQIYI will continue to present high-quality original works like The Ideal City, supporting creators in their exploration of realistic themes while delivering fresh and relatable experiences to its audience.

Judy Collins on Her Latest Album, Aging as an Artist, and the “Gentle Persuasion”...

Jenny Slate has a new movie out this summer—but she’d rather talk about defunding...

Your HelloGiggles horoscope, October 6th to 12th: Unexpected surprises are coming your way

I had to “break up” with my therapist because finding effective mental health care...