HOHHOT, China, Sept. 1, 2021 /PRNewswire/ — Inner Mongolia Yili Industrial Group Co., Ltd., one of China’s dairy industry giants based in Hohhot, the capital city of North China’s Inner Mongolia autonomous region, reported an operating income of 56.51 billion yuan ($8.74 billion) in the first six months of 2021, which is a year-on-year growth of 18.89 percent, according to the company’s performance report for the first half of 2021. 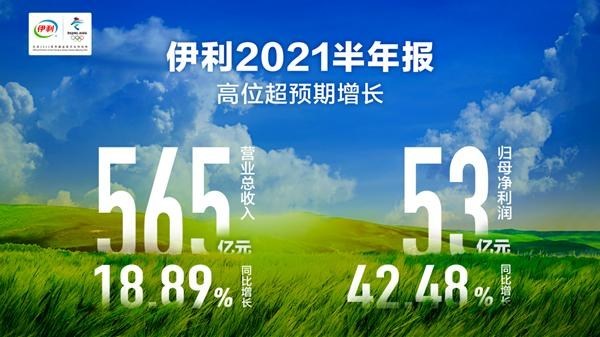 Yili Group reports an operating income of 56.51 billion yuan in the first half of 2021.

Analysts pointed out that Yili’s performance, despite the negative global economic impact of COVID-19, reflects China’s rapid economic recovery and structural upgrading of its market demand. They said it was also a manifestation of Yili’s long-term stable development due to its competitive advantages and anti-risk capabilities.

During the first half of the year, the sales revenue of key products such as Anmuxi, Jindian and Changqing increased by 20.7 percent year on year, showing a rapid growth momentum.

In addition, Yili was selected as the representative corporate deep dive for the agriculture and food sector, giving credit to its carbon reduction practices, according to the Corporate Net Zero Pathway that was released by the United Nations Global Compact on July 27.

Yili has been setting up a comprehensive organizational structure for decarbonization initiatives since 2010, and is the first dairy company in China to implement an independent carbon inventory.

Puff-sleeved dresses are trending for fall, and we can’t get enough

What I’ve Learned in 10 Years of Therapy