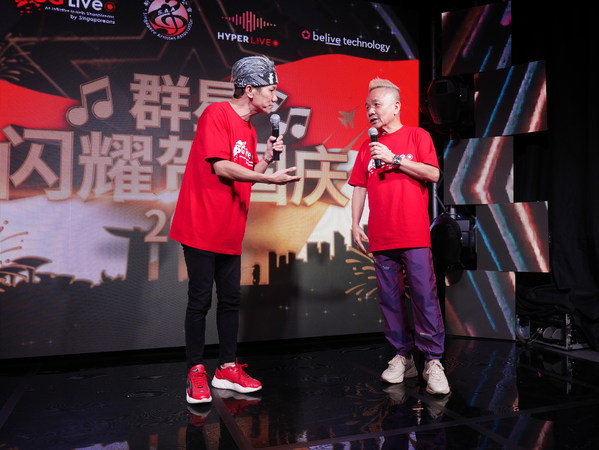 Getai veterans Wang Lei (left) and Marcus Chin (right) exchanging jokes on stage, much to the delight of viewers online

It was the first of a series of locally produced events planned under the SGLive Initiative pioneered by HyperLive. The initiative aims to build a caring community and support local businesses that are impacted by the pandemic.

Mr Edwin Tong, Minister for Culture, Community and Youth and Second Minister for Law, who was the guest of honour for the concert, said: “The SGLive Initiative is really a wonderful idea and it is especially in times like these that more Singaporeans should step up, take the lead, help other Singaporeans and also local businesses in need, so that as one united people, we can all work in concert to overcome the challenges that the pandemic has brought upon us.”

HyperLive.tv is powered by local livestreaming solutions provider BeLive Technology and offers highly interactive features that makes for a more engaging viewing experience. During the concert, viewers were able to participate actively throughout the concert by voting in the song selection poll. In keeping with the national day theme, nostalgic local tunes such as Where I Belong and Xi Shui Chang Liu were selected during Pei Fen’s and Jason’s sets respectively.

The audience also sent virtual e-gifts to support their favourite artistes, with all proceeds going towards Children’s Society. Popular getai veteran Wang Lei raised the highest amount during his segment, garnering over $5,000 in e-gifts. A total of $33,091 was raised during the concert, which will be further matched dollar-for-dollar by generous supporters. Along with donations made directly to Children’s Society, it brings the total funds raised to $73,884.

Ang Boon Min, Chief Executive Officer of Singapore Children’s Society, sent words of encouragement and appreciation for the organisers’ efforts in putting the show together. Senior Director of Community Engagement and Partnerships, Joyce Teng, added: “We would like to thank HyperLive Entertainment and Singapore Artistes Association for championing our cause through this event. These funds will support diverse programmes and services designed to meet the varied needs of children, youth and families in need under our care.”

A second virtual concert, “All Stars e-Getai Charity Concert 2”, will be held on 26 Sept at 9pm to celebrate the Mid-Autumn Festival and raise funds for charity.

My Only Goal This Summer Is Doing Nothing

Protests during Fashion Week: a new normal? – The Mancunion