SYDNEY, Sept. 3, 2021 /PRNewswire/ — Iconic music sensation ABBA officially motivated their fans into a frenzy earlier this morning.  After a 38-year hiatus, the band launched their new album, Voyage leading with singles “I Still Have Faith In You” and “Don’t Shut Me Down” via a series of spectacular global moments featuring Sydney, in keeping with their unprecedented popularity and legendary status. 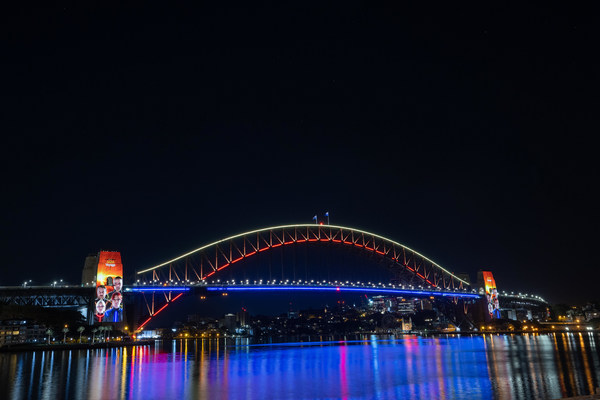 Striking avatars of Agnetha, Björn, Benny, and Anni-Frid illuminated the Pylons of the iconic Sydney Harbour Bridge accompanied by a dazzling light display across the Bridge arch.

Destination NSW CEO Steve Cox described the Sydney Harbour Bridge tribute as fitting recognition of ABBA as one of the world’s most enduring bands.

“Sydney is proud to join eight other great cities around the world, to celebrate this significant milestone for one of the world’s greatest bands, ABBA. We know that the vibrant imagery of ABBA illuminated onto the Sydney Harbour Bridge will bring hope and inspiration to all, inspiring our international friends to start planning their trip to Sydney for when international borders re-open.”

For more than four-decades, Sydney has held a special place in ABBA’s hearts since they visited in 1977 on their first and only tour of Australia.

“We couldn’t be more thrilled for Sydney to be part of our global album launch. Sydney has always been a special city to us and we have wonderful memories of the time we spent performing in Australia, said ABBA.

Adam Ireland, General Manager, BRING said; “When we heard of the imminent release of ABBA Voyage and unwrapped stories of the band’s history with Sydney, we knew there was no better fit than DNSW, and no better place than our wonderous harbourside. Streaming data backed up our vision, showing that Sydney has the fourth highest volume of streams for ABBA, exceeding global benchmarks.”

Significant locations included in ABBA’s visit to Sydney in 1977, during their first and only tour of Australia, included:

To follow in ABBA’s footsteps and plan a trip to Sydney, go to www.sydney.com.

Please stay up to date on the latest NSW Government health advice regarding COVID-19 and travel within NSW, here.

Destination NSW is the lead NSW Government agency for the State’s tourism and major events industry and is responsible for devising and implementing strategies to grow the State’s visitor economy. Our particular focus is driving tourism and acquiring and developing major sporting and cultural events for Sydney and regional NSW. In addition, Destination NSW is the major investor in Business Events Sydney with the aim of securing more international conventions, incentive travel reward programs, corporate events and exhibitions.

Striking avatars of Agnetha, Björn, Benny, and Anni-Frid illuminated the Pylons of the iconic Sydney Harbour Bridge accompanied by a dazzling light display across the Bridge arc – Credit: Will Hartl Striking avatars of Agnetha, Björn, Benny, and Anni-Frid illuminated the Pylons of the iconic Sydney Harbour Bridge accompanied by a dazzling light display across the Bridge arc – Credit: Will Hartl

Her Legacy: The Great War of Cornelia Steketee Hulst

The parenting double standard I’m done being quiet about