Fengtai Lights up the “Home Lamp” to Convey Reunion Blessings

BEIJING, Sept. 22, 2021 /PRNewswire/ — At 7:30 p.m. on Mid-Autumn Festival, September 21, the 2021 “Lugou Xiaoyue” Mid-Autumn Festival Grand Event with the theme of “Full Moon in Beijing, Love Across China ” were held in the Beijing Garden Expo Park on the Bank of Yongding River. The gala carried the feelings of reunion, appreciation of beauty and perseverance through poetry, music and dance performances. A night with “wonderful writings about Fengtai”, it perfectly embodied the essence of Fengtai’s culture. 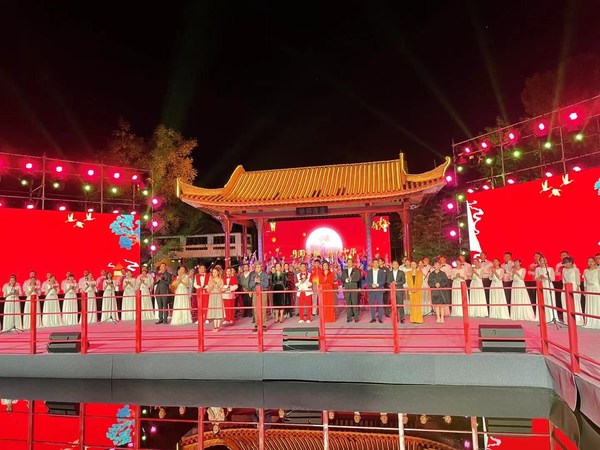 There are 12 programs in the 2021 “Lugou Xiaoyue” Mid-Autumn Festival Grand Event, which consist of five parts: the preface, the first chapter “How rare the moon, so round and clear!”, the second chapter “Bright is the moon over my home village”, the third chapter “Raising my cup I beckon the bright moon” and the ending chapter. Among the performances are the revamped Peking Opera “How rare the moon, so round and clear!”, the Intangible Cultural Heritage Taiping Drum “Enjoy peace and harvest with a full moon”, the original drama song “Picturesque scenery”, allegro “Seeing Fengtai with wonderful writings”, and also the creative music, poetry and painting work “I have a date with Fengtai”, the situational dance performance “Fengyan Lugou Bridge”. Additionally, the duet “rise of the bright moon” and the children’s chorus “Lugou ballad” both lit up the night with melodious music. Li Nina, the image ambassador of Beijing’s bid for the 2022 Winter Olympics and the world champion of Freestyle Aerials, also appeared at the grand event and led the singing of “Meet in Beijing” to celebrate the upcoming 2022 Beijing Winter Olympics with the audience.

At the end of the performance, the honorable representatives of the fight against the epidemic in Fengtai District, sang “Homeland” along with the on-site performers and the audience, which fully demonstrated the feelings of “Lugou Month · Family and Country”.

The whole performance not only showed the Chinese people’s tender emotion towards the moon culture, but also reflected the coming together between the past and present through various performances. This was a night that displayed the long history, rich traditional culture inheritance and moon culture of Fengtai District in different forms, combining modern development, and fully displaying the importance and uniqueness of Fengtai as an indispensable pearl in the Yongding River culture belt of Xishan.

At the grand event, in addition to innovatively integrating the unique intangible cultural heritage of Fengtai District into the performance, many cultural elements were strung together through “situational hosting”, many of which were original programs created by Fengtai District.

Lugou Bridge marked the beginning of the Anti-Japanese War, and left an important historical memory for Fengtai. The original sitcom “Smoke and Mist on Lugou Bridge” was carefully arranged to show the history of Chinese people’s indomitable Anti-Japanese war with artistic means.

When it comes to appreciating the moon, many people will think of “Lugou Xiaoyue”. As one of the eight scenic spots in Yanjing, Lugou Xiaoyue is not only a cultural symbol of Fengtai, but also that of Beijing. The original song and dance “Lugou Xiaoyue” constructed the grand scene of Lugou Bridge with elegant Chinese dance. The chorus composed of Fengtai District teachers and workers sang the vision of Fengtai people to build a beautiful Fengtai.

The Shenzhou XII manned mission was a complete success, and the three space warriors returned home safe and sound. As the birthplace of China’s aerospace industry, Fengtai has made outstanding contributions and has always supported and promoted the development of China’s aerospace industry. The original scene song and dance performance “Chang’e to the moon” showed the Chinese people’s exploration and curiosity about the moon and the cultural heritage of the Chinese nation.

The “Lugou Xiaoyue” Mid-Autumn Festival Grand Event has been held for 14 years and has become a cultural card of Mid- Autumn Festival in the capital.

This year’s event continues to present the interactive activity of “Lugou Xiaoyue” Mid-Autumn Festival – “lighting the home lamp and delivering blessings”. Home lamp has become a characteristic Mid-Autumn Festival folk activity in Fengtai District. The host and the audience light up home lamps together, wish the motherland prosperity, peace and security, send the blessing of family reunion to everyone, and lead the new social trend of morality and goodness.

A Conversation on How to Manifest Your Best Self with Dr. Anna Roth

The best celebrity Halloween costumes from 2019