BEIJING, Oct. 14, 2021 /PRNewswire/ — With the theme of “Mutual learning among civilizations: Jointly building a community of shared future for mankind”, the sixth annual conference of the Taihu World Cultural Forum kicked off on Tuesday in Bengbu City of east China’s Anhui Province, where experts and officials from all over the world gathered to share insights and views of civilizations between different cultures. 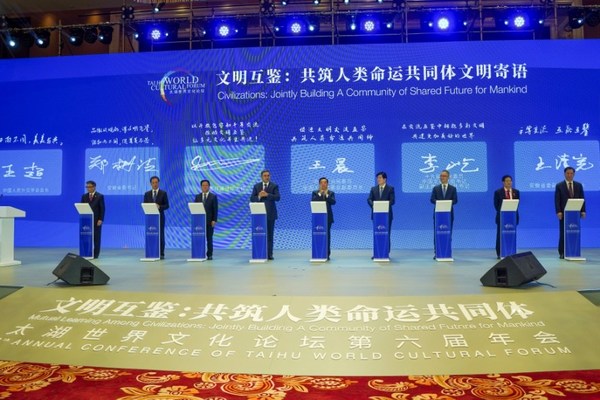 Wang Chen, a member of the Political Bureau of the Communist Party of China (CPC) Central Committee and vice chairperson of the Standing Committee of the National People’s Congress, spoke at the forum that, China’s efforts in strengthening dialogues and exchanges among civilizations and promoting the building of a community with a shared future for mankind fully demonstrate China’s firm determination and sincere desire to adhere to the cultural diversity and win-win cooperation.

Wang Chen also advocated that different countries and cultures in the world should adhere to the development principle of mutual respect, and achieving shared growth through discussion and collaboration.

As a high-level international cultural forum initiated by China, the Taihu World Cultural Forum should play a vital role in enhancing world cultural dialogue and exchanges and mutual learning among civilizations, added Wang.

Zheng Shanjie, Secretary of the Anhui Provincial Committee of the CPC made remarks at the forum that Anhui Province has a long history and will be a good envoy of cultural exchanges and play a greater role in promoting dialogue and exchanges among different civilizations.

Nearly 500 delegates from more than 30 countries and regions participated the annual meeting through online and offline forms. Among them, Romano Prodi, former prime minister of Italy and the honorary president of the forum delivered a speech through video.

Stop telling women what to rap about

Should You Automate Your Accounts Payable Processing?