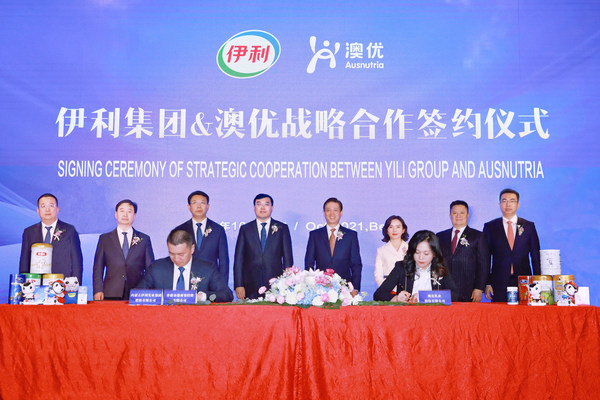 According to the announcement by Yili Group, the company will team up with Ausnutria Dairy through its wholly-owned subsidiary Hong Kong Jingang Trade Holding Co., Ltd. (“Jingang”), as a move to further its steps into infant formula and nutrition products.

Jingang will acquire a total of 531 million shares held by previous shareholders at a price of HK$10.06 per share, which represents approximately 30.89% of the total number of issued shares of Ausnutria. In addition, Ausnutria will issue 90 million new shares to Jingang at a price of HK$10.06 per share. If the above two transactions are successfully completed, Jingang will hold a total of 621 million shares of Ausnutria, accounting for 34.33% of the company’s issued shares in total, thereby making Yili the largest single shareholder of the company.

Pan Gang, Chairman of Yili Group, said that as the two enterprises have much in common, Yili recognizes the values, strategic layout, and the core team of Ausnutria. In the years to come, Yili will bring into full play its strengths in terms of company size, brand building, channels and industrial chain to enable Ausnutria’s sound development over the long term.

Yan Weibin, Chairman of Ausnutria, said a strategic investor like Yili won’t only create synergy in the industrial chain but also empower Ausnutria in terms of management and strategic planning.

Partnership will strengthen Yili’s leadership in milk formula and facilitate the company’s entry into the nutrition products market.

Infant formula featuring high growth rate and high value is a category that Yili will focus on and tap into its full potential in the future. In August 2021, Yili’s Jinlingguan Series took the lead among all brands of its kind in terms of the growth rate of all channels in the Chinese market. Yili is also capturing a growing share of the goat milk infant formula market. The newly launched Jinlingguan UITSTEKEND GEITENMELK stood out with its premium quality and saw a surge in sales as high as 200%.

When the transaction between the two parties is completed, Ausnutria’s long-term development will be significantly boosted, which will in turn speed up Yili’s endeavor to fulfill its strategic layout in milk formula. Setting infant formula as the starting point, the two companies will complement each other in terms of material purchasing, marketing models, locational advantages, and R&D.

Ausnutria has also established a comprehensive layout in nutrition products such as dietary supplements, probiotics, and food for special medical purposes, and it is developing into a high-end nutrition product and health service provider covering all ages and the full life cycle. At this point, the integration of optimal resources from both sides will also facilitate Yili’s entry into the market of nutrition products.

6 Australian-born jewellery brands to know before everyone else does

Peter Lindbergh in his last interview with Vogue Germany

Lacing Up A New Perspective On Self-Love and Rediscovering Me