Bathed in warm autumn sunshine and surrounded by golden ginkgo trees in late October, Yang Yang could not avoid getting sentimental over the past and future of the Winter Olympics – with next year’s Games set to start in Beijing in exactly 100 days. 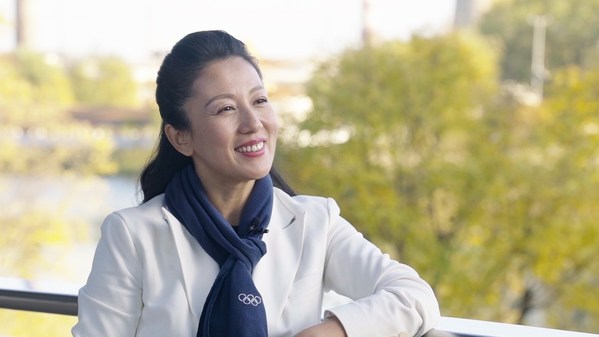 Yang Yang receives an interview with China Daily on Tuesday in Beijing. [Photo by Wang Yuxi/chinadaily.com.cn]

China’s very first Winter Olympic champion in the 2002 Salt Lake Games now plays a leading role in organizing the upcoming Games and several international sport organs, but the short track speed skater said she is “promoting” rather than “administrating” winter sports, as a lot has happened in her country in the 20 years since her historic achievement.

“I think my first gold aroused Chinese people’s attention to winter sports in that time. And now preparing for the home Games, we already have 300 million people involved in winter sports. That is a great contribution to the winter sports worldwide,” she said in an exclusive interview with China Daily.

Taking in Shougang Big Air, the freestyle skiing and snowboard ramp at Beijing’s Shougang Industrial Park where the 2022 organizing committee is based, the double Olympic champion said Beijing is fully prepared to welcome the world only 14 years after hosting the Summer Olympics in 2008.

“In 2008, we impressed the world with an ‘exceptional’ Games; in 2022, we are aiming for an athlete-centered Games and 300 million people with winter sports, We are trying to achieve different goals but with the same value.”

Serving as vice president of the World Anti-Doping Agency and chairing the athletes’ commission for Beijing 2022, Yang’s mission is to protect the integrity of the competition and help organizers meet athletes’ needs to ensure it is an athlete-centered Games.

After attending the delayed Tokyo Games this summer, Yang said she was deeply touched by the world coming together despite still being affected by the pandemic. “A safe Games is the priority of everyone, and we will firmly follow the COVID-19 guidelines during the Games. Beijing is prepared.”

Yang, 46, was born in Heilongjiang province in Northeast China, the regional home to China’s winter sports because of its climate. When she retired in 2006 after the Turin Winter Games with a 1,000-meter bronze medal, China was still lacking a strong foundation in snow sports.

China won a historic five golds at the Vancouver Games in 2010 in its traditional strengths, short track speed skating and figure skating. It was not until after the Pyeongchang Games in 2018 that China established national teams for nearly all the sports in Winter Olympics, including skeleton and bobsled.

China’s long jump-turned skeleton athlete Geng Wenqiang has even made podium finishes in international competitions in the run-up to 2022.

During the celebrations to mark the 100-day countdown, which began on Wednesday, Yang visited venues and talked to athletes to check on the preparation work. Yang, a mother of two, is eager to present the stage for a new generation of athletes.

“It is your stage. Enjoy the moment, even with pressure. And later on it will be something you will always remember and cherish.”

Though she is perhaps one of the busiest people in the world right now, that experience is just as enjoyable as it was in the past.

Never Give Up: Questions to Ask When Everything Isn’t OK

Your HelloGiggles weekly horoscope, February 16th to February 22nd: There’s a reason why your...

Have a low libido? Here’s why chronic stress is killing your sex drive