ADELAIDE, Australia, Nov. 1, 2021 /PRNewswire/ — Penfolds has announced a new wine blended from five vintages of Grange, aptly named Penfolds g5. The wine is the final release in the ‘g’ series trio – following the highly successful launch of Penfolds g3 and g4 in 2017 and 2020 respectively. The Penfolds g5 blend energetically entwines Grange DNA from the exceptional 2010, 2012, 2014, 2016 and 2018 vintages, to create a completely unique expression of Penfolds flagship.

Penfolds Chief Winemaker, Peter Gago said of the new release, “Many collectors have queried why the landmark 2010 Grange was not included in g3 or g4. And provocatively, how could we not include the yet-to-be-released 2018 Grange?! Fixed.“, he continued…“Each of the five vintages sensitively brings their own personality & contribution to the blend. Which is an inverted anticipatory response to the inevitable query – why no g6?!” 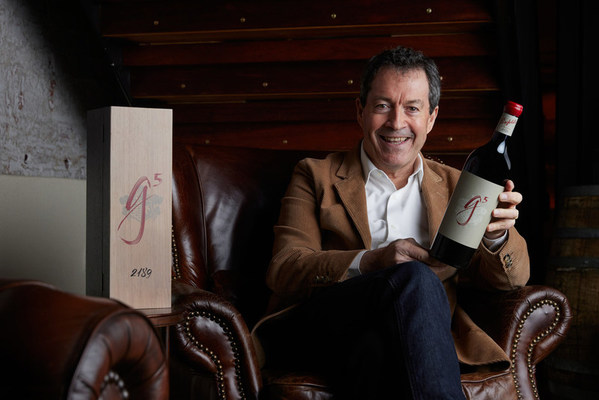 Blending across vintages is part of Penfolds winemaking philosophy and has been since 1844. Penfolds Tawny styles, famous in the mid-1800’s, continue a long tradition of fortified wines that celebrate this particular blending style. A natural progression was to apply this venerated technique to create a new Penfolds red style, which now falls under the ‘g’ series tier.

In 2017, Penfolds released the first edition of this inimitable wine, Penfolds g3, a 2008, 2012 and 2014 blend. Two years later, Penfolds g4 was unveiled – from the 2002, 2004, 2008 and 2016 vintages. Stylistically and philosophically equal, the newly released Penfolds g5 is an evolution of the original concept, blending not three or four vintages of Grange but five to deliver an exceptional wine that honours our globally recognised icon.

The release of Penfolds g5 coincides with Grange’s 70th anniversary year. After seventy years of unbroken vintage releases (1951 experimental – 2021), Grange, a South Australian heritage icon, is one of the world’s most collected wines, known for its Australian identity, consistency and proven aging potential. The much-awaited 2018 Grange will be released in August 2022, adding further mystery to the Penfolds g5 release.

Only 2,200 bottles of the ultra-rare Penfolds g5 are available around the world. RRP $3,500.00 AUD for a 750ml bottle. Expressions of interest will open Monday 1st November via www.penfolds.com.

Since 1844, Penfolds has played a pivotal role in the evolution of wine making with a history and heritage that profoundly reflects Australia’s journey from colonial settlement to the modern era. Penfolds collection of benchmark wines were established in a spirit of innovation and the constant and endless pursuit of quality, evidenced from the secret bottling of Grange in 1951 and the unbroken line of vintages of what is now arguably Australia’s most iconic red wine. Today, the collection continues to display the distinctive and consistently recognisable Penfolds ‘House Style’; the ultimate expression of Penfolds time-honoured tradition of sourcing the best fruit from the best regions. Historic blends, signiﬁcant milestones and heritage vineyards have been honoured by a lineage of custodians whose courage and imagination, precision and humility have ensured Penfolds remains true to its original values while remaining relevant for current and future generations. The stories and philosophies behind each label bring a timeless quality, making Penfolds wines special and compelling for collectors and drinkers the world over.

Fashion In 3D: An Opportunity For Greater Innovation – Forbes