GUANGZHOU, China, Nov. 3, 2021 /PRNewswire/ — Artequick artemisinin and piperaquine tablets have once again become buzzwords across the globe, as most recently, their effectiveness in treating COVID-19 was hotly debated by live streamers on overseas social media and we media platforms. These drugs first came to the industry’s attention after the International Journal of Antimicrobial Agents published a paper titled “Safety and Efficacy of Artemisinin-Piperaquine for Treatment of COVID-19”. 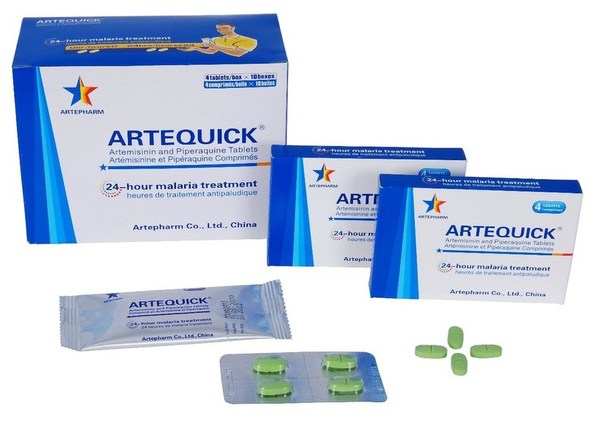 As the fourth-generation artemisinin compound, artemisinin-piperaquine had been registered in dozens of countries, said Wang Xinhua, former president of Guangzhou Medical University, senior consultant at Guangdong New South Traditional Chinese Medicine Institute, and leading member of the group for artemisinin’s clinical research and application in China, adding that for decades, it has been widely used as an effective cure for malaria, particularly falciparum malaria. Since the onset of the coronavirus pandemic, the devoted team of scientists has examined the compound’s efficacy against the virus, and their breakthrough has unleashed a hot debate overseas. This implies how the scientific community and the general public are in desperate need of effective drug treatments for COVID-19.

Jointly developed by Artepharm Co., Ltd., a subsidiary of Guangdong New South Group, and the Professor Li Guoqiao-led research team at Guangzhou University of Chinese Medicine, Artequick artemisinin and piperaquine tablets were certified by China’s National Medical Products Administration as a Category I new drug in 2006. And they have been the drug of first choice recommended by the National Health Commission of China since 2009. Under patent protection in 40 countries, including the U.S., and a registered trademark in 29 nations, Artequick has been registered and licensed to sell in 24 states, and is now among major antimalarials in Nigeria, Tanzania, and Kenya. That being so, the medication has contributed to a malaria-free world at a fast pace by preventing tens of millions of people from contracting the disease.

Since last year, Guangdong New South Group, together with scientists from the Artemisinin Research Center of Guangzhou University of Chinese Medicine and Guangzhou Institute of Respiratory Health, has conducted clinical trials for artemisinin-piperaquine in treating COVID-19 at Guangzhou Eighth People’s Hospital in Guangdong Province and Hongqi Hospital Affiliated to Mudanjiang Medical University in Heilongjiang Province. The study found that it took 8.3 days on average for the nucleic acid test results of all 85 observation cases (who were treated with the compound) to turn negative. And when observed on the 21st day, 98.8% of them saw a negative result, and on the 28th day, 100%, compared to 14.3% and 58.7%, respectively, for the control group of 63 infections not on artemisinin-piperaquine medication. According to an in vitro experiment by Guangzhou Institute of Respiratory Health, the highest non-toxicity concentration of artemisinin-piperaquine stands at 125 micrograms per milliliter, which helps inhibit HCoV-229E from causing a cytopathic effect in HuH-7 cells.

In many African countries, the personnel of local Chinese-funded institutions and enterprises had produced a significant result, as they adopted artemisinin-piperaquine to prevent and treat the coronavirus, Ms. Huo Jiangtao, head of Africa Guangdong Business Association noted. No COVID-19 cases treated with the drug in the Comoros, Kenya, and some other nations have died from the disease.

The progress was lauded by Zhong Nanshan, China’s top respiratory expert. The experiment had produced “some preliminary positive results”, he said, adding that the efficacy of artemisinin-piperaquine in treating the virus should not just be based on the rate of nucleic acid tests conversing negative, but the holistic observation of genetics and meticulous verification.

“Traditional Chinese medicine (TCM) has been a highlight of China’s response to COVID-19. Artemisinin and piperaquine tablets are derived from TCM. Artemisinin is extracted from the plant Artemisia annua, an herb employed in TCM, and with years of experience, proves to be safe and effective in curing malaria. Going ahead, the drug is expected to have a greater role to play in the treatment of other diseases,” said Zhu Layi, president of Guangdong New South Group.

The research on using artemisinin-piperaquine to treat COVID-19 has now been steadily advanced.

A Weekend Wellness Getaway: My Experience at the Caldera Retreat

Kate Middleton opened up about her “terrifying” Prince George birth announcement and living with...