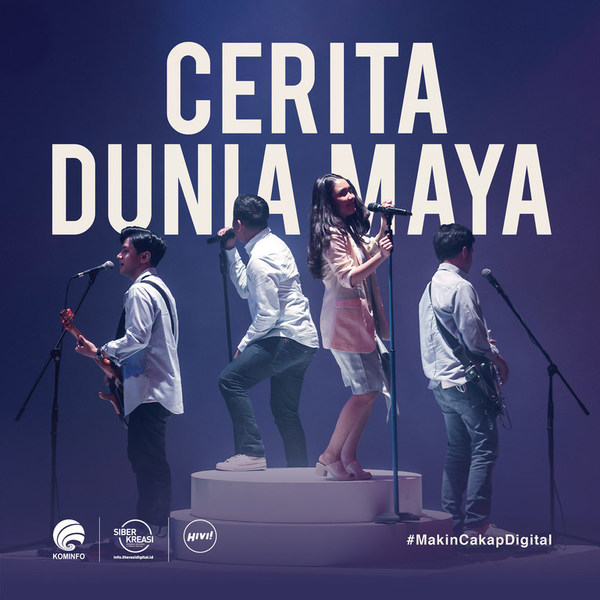 In collaboration with the Ministry of Communication and Informatics, HIVI! unveils “Cerita Dunia Maya #MakinCakapDigital”

The collaboration has produced easy listening music that aims to raise young people’s awareness in using the internet for good purposes. The campaign also aims to avoid negative impacts that might be harmful, especially to the mental health of young audiences.

There are over 200 million people in Indonesia who have been actively using internet platforms to maintain their social interactions and also to stay productive while staying at home due to social and economic restrictions.

“However, digital technology also has negative impact when it is used for circulating hoaxes, cyber-bullying, radicalism, and even terrorism. Thus, equality in digital literacy is crucial as it will encourage young people, in particular, to use the internet wisely,” said Rizki Ameliah, Coordinator of Digital Literacy Kemenkominfo.

Therefore, the government is keen to involve the HIVI! band, which consists of four young and talented musicians and has released popular and easy listening music since 2002, to reach out younger audiences in socializing digital literacy.

Through this collaboration, HIVI! band wrote and produced a campaign song titled “Cerita Dunia Maya #MakinCakapDigital” to send messages to Gen Z to use the internet for positive activities as well as educate them to be brave and responsible in exploring themselves through digital content.

“Music is a universal language and it enables people to relate their life with any particular song, so it will be easier to penetrate the messages of the digital literacy campaign to young people and wider attention across the nation,” said Rizki.

#MakinCakapDigital: Spreading Positivity and Creative Use of Internet for Gen Z

Using hashtag #MakinCakapDigital to relate the Gen Z’s digital nature, GNLD Siberkreasi’s campaign is created to mainstream digital literacy for positive and creative purposes, especially for Gen Z. With the collaboration, the ministry and HIVI! Band have produced a campaign song that encourages young people in utilizing all kinds of internet platforms to stay productive, keep transforming to the best version of themselves, be self-filtering hoaxes, and anti-cyberbullying.

With simple but impactful lyrics “Di dunia maya kita semua punya cerita, di dunia maya kita semua bisa berkarya!” (We all have stories in the digital world, we all can be creative in the digital world), the song calls on all young people to use the internet for positive and productive activities as well as be the change that they wish to see in the world, starting from themselves.

The ministry’s Siberkreasi and HIVI! band invite all members of Gen Z and the public to enjoy “Cerita Dunia Maya #MakinCakapDigital” campaign music video on Youtube and Spotify.

About The Ministry of Communication and Informatics of Indonesia

The Ministry of Communication and Informatics of Indonesia through Ditjen Aptika has the primary function of spreading and developing the national digital infrastructure to accelerate Indonesia’s digital transformation.

The ministry is working with National Digital Literacy Movement Siberkreasi as its partner to provide education on digital literacy to the broader public through various forms of media. This movement focuses on using digital literacy to elevate the national capability and further the Indonesian people.

Karl For Ever: celebrities and muses gather in Paris to pay tribute to legendary...

What is a “normal” period? 5 signs your flow is totally healthy, according to...