HANGZHOU, China, Nov. 17, 2021 /PRNewswire/ — A global cultural exchange event has been held in eastern China’s Hangzhou city, where creative ideas from around the world met “on the clouds”. On Nov. 8, the 15th Hangzhou Cultural and Creative Industry Expo, which was held in a different way against the backdrop of the pandemic, closed. With the theme of “Creative Hangzhou, Connecting the World — Culture Leading a Better Life”, this year’s expo adopted the combination of online and offline exhibitions to show over 3,000 cultural brands and enterprises from more than 30 countries and regions including the United Kingdom, France, Italy, Poland, Japan, the Republic of Korea and Thailand. More than 200,000 pieces of Chinese and overseas cultural products were displayed in the online venue, which attracted 190 million views. It was a grand event of global cultural exchange and integration, according to Hangzhou Municipal Government. 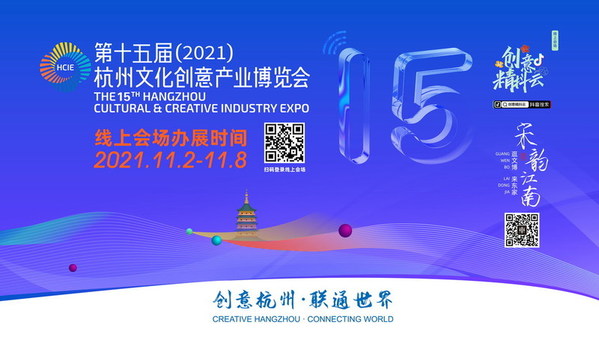 Under the background of epidemic prevention and control, this year’s expo moved offline exhibition online. Instead of making an appointment or buy tickets, citizens could “cloud travel” the two major exhibitions featuring creativity and craftsmanship on TikTok.

According to Meng Wenbo, co-chairman and CEO of Dongjia, an e-commerce platform focusing on craftsmanship, an online expo has eliminated the limitations of offline exhibitions, opened up new ways of visiting exhibitions and new scenes of cultural infiltration. At the same time, the integration of online exhibitions and sales also helps businesses to continue to operate well in the context of epidemic, and truly brings a “never-ending cultural fair” to cultural lovers. The themed venue under the name “Song Yun Jiang Nan“, featuring the spirit of Song Dynasty in eastern China, focused on attracting cultural and creative professionals, craft designers, new craftsmen and other professional groups. During the exhibition, a large number of creative products that reflected Chinese traditional culture, such as tea set gift box and blue and white porcelain, made their debut and became instant hits.

After more than a decade of development, the expo has become a “cultural golden name card” of Hangzhou, known as one of China’s four key comprehensive cultural exhibition activities. According to reports, though under the background of the epidemic, Hangzhou’s cultural industry still achieved 228.5 billion yuan (about 35.7 billion U.S. dollars) in added value last year, up 8.2 percent year on year, and the comprehensive development strength of Hangzhou’s cultural industry ranks among the first ranking of large and medium-sized cities in China. Since the beginning of this year, Hangzhou’s cultural industry has shown a strong development momentum. In the first three quarters, the added value reached 190.1 billion yuan, an increase of 10.3 percent year on year, and the growth rate of digital content industry reached as high as 12.8 percent.

Digital technology has gained integrated application and innovation in the field of cultural industry, thus providing “core” support for cultural industry on the “cloud”. At this year’s expo, over 3,500 online exhibitors and brands participated, and nearly 240 theme live broadcasts, special auctions and other activities were held. Citizens could buy global cultural products without leaving home. The event has showcased latest achievements in the development of Chinese cultural industry to domestic and overseas merchants on all fronts, strengthened international cultural industry exchanges and cooperation, and further enlarged the influence of the Hangzhou expo.

Hangzhou Cultural & Creative Industry Expo is a creative exhibition of life aesthetics, a grand event of economic and cultural exchanges, a platform for in-depth collision of ideas and a front for industry foresight. During this year’s expo, several latest research results of industry development index were released to further enhance the brand influence of an “expo of ideas”.

At the Cultural Industry Summit, Xiong Chengyu, a foreign academician of the European Academy of Sciences and director of the National Cultural Industry Research Center of Tsinghua University, published the Development Index and Evaluation Report of China’s Digital Content Industry (2021) online, and evaluated the development index of China’s digital content industry from five aspects: industrial scale, social contribution, value creation, development environment and industrial competitiveness. According to the research index, Hangzhou ranks among the first tier in the development of digital content industry in China and is the representative city in the industrial circle of the Yangtze River Delta.

According to Xiong, Hangzhou, with its good industrial infrastructure, is an important city in China’s digital economy. Hangzhou not only pays attention to the cultural industry itself, but also goes hand in hand from supporting policies and industrial cluster development. Therefore, Hangzhou’s digital content fields such as animation, games, e-sports, film and television are developing well. In addition, digital content has been integrated into all aspects of social life, spanning national boundaries and fields. He hoped that Hangzhou will bring original digital content with Chinese characteristics to users all over the world.

Wu Xiaobo, a Chinese financial writer, said that Hangzhou has always been a consumer city throughout history, and young people are the most important reason why Hangzhou’s cultural industry can maintain a strong development momentum. In all cultures, young people are the most important participating force and fermentation factor. Especially in recent years, the net inflow rate of talents in Hangzhou continues to rank first in China, which brings rich cultural industries and strong consumption capacity to Hangzhou.