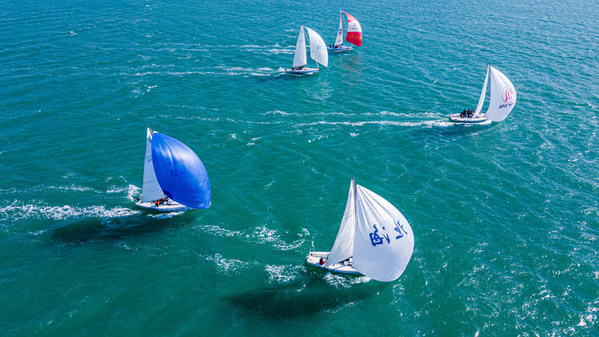 With sailing as the core, this competition will set up six championships including J80 class sailing competition, amateur social group sailing competition, Guangxi youth surfing, windsurfing (OP sailing, kiteboarding), and rowing (kayaking), creating a high-specification, high-quality and high-level offshore racing from Yintan to Weizhou Island. This event attracted 19 teams and more than 120 high-level sailors from China, the United States, Germany and other countries and regions to join, fully showing the strengths and influence of water sports in Beihai and Guangxi.

Empowered by the development of Beihai with the “Sports Plus” mode, the event aims to further integrate marine sports into Beihai’s “ancient, beautiful, modern and trendy” urban traits through which are driven by events, supported by the masses and integrated by sport and tourism. During the promotion of this event, the organizer held a promotion meeting in Shanghai, and carried out a number of interactive experience activities such as trophy design collection and “OP sailing into campus”, which attracted many sailing enthusiasts to participate.

In recent years, by holding various international marine sports events, Beihai has fully tapped high-quality marine resources such as Beihai Yintan Beach and Weizhou Island and turned itself into an international coastal tourism resort. With its potential of marine resources fully unleashing, Beihai’s popularity and reputation have been increasingly improved. Sailing and other related events have gradually become an important platform for all-round, multi-angle and high-profile publicity to showcase Beihai’s great image.

In the future, Beihai will continue to boost the development of urban water sports with greater openness and more exciting events, and serve as an important base for international sailing at an early date. Beihai will also actively advance the BRI development with the help of sports and promote itself as a cultural exchange center for Maritime Silk Road.

“I welcome very much the idea of Aspire Fellows Meet Other Sports,” said Arsene Wenger at Aspire Academy Global Summit

Shein: How a Chinese brand is taking over the fashion world – Buzz.ie

15 holy grail products from CURLFEST that will revive your natural hair from summer...