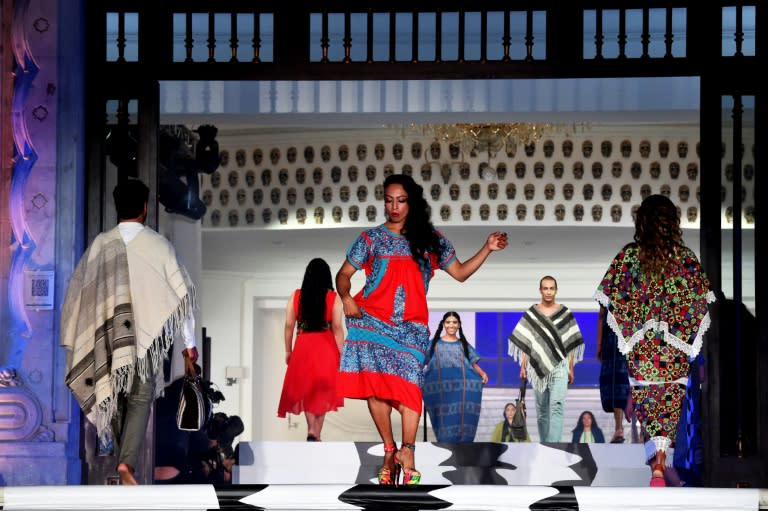 Mexico is fighting back against what it calls the plagiarism of indigenous textiles, bringing together traditional artisans and international designers for dialogue aimed at creating a more equitable fashion industry.

Dozens of indigenous weavers and other artisans are gathering this weekend at the Los Pinos former presidential residence in Mexico City for the “Original” fair hosted by the culture ministry.

Alongside an open-air market selling clothes and accessories such as the huipil, a traditional white cotton blouse with finely embroidered patterns, there are fashion parades resembling indigenous pride marches.

The goal is to end what Mexico’s leftist government denounces as cultural appropriation of the motifs, embroidery and colors of indigenous communities by foreign fashion houses.

“Plagiarism is not a tribute. Theft is not the fruit of inspiration,” Culture Minister Alejandra Frausto said at the fair’s inauguration.

She denounced the “modern-day pirates” who “take what they like and label it as any kind of merchandise.”

Mexico won an apology a year ago from French designer Isabel Marant after Frausto demanded an explanation for Marant’s use of the traditional patterns of the Purepecha community in her collection.

Similar complaints have been lodged against major clothing brands, including Zara and Mango.

Marant said future designs would properly “pay tribute to our sources of inspiration.”

A representative of her company was due to meet directly with indigenous artisans at the Mexico City fair, as was one for the Spanish designer Agatha Ruiz de la Prada.

On Friday, two young designers from Paris sat down with craftsman Ignacio Netzahualcoyotl and his partner Christian Janat at their workshop in the state of Tlaxcala east of Mexico City.

“Plagiarism is the result of a lack of communication,” Netzahualcoyotl said afterward.

“We ask that our work be paid for fairly,” he added.

“The price must take into account the design, the patterns, the number of hours worked,” he said after presenting his fabric to the two Parisians.

“We want to come to an agreement with the artisans with whom we are going to work,” said French designer Theophile Delaeter, co-creator of the Calher Delaeter brand with his Franco-Mexican co-creator Alonso Calderon Hernandez.

Indigenous artisans at the fair complained of discovering copies of their fabric on the internet.

“A few months ago, we fought because we found a computer-reproduced huipil,” said Candy Margarita de la Cruz Santiago, a young weaver from the southern state of Oaxaca.

Legal measures are being put in place to tackle the problem.

“Under new provisions that we’ve had since last year, written consent of the communities is necessary when this kind of textile art is going to be used for profit,” said a representative of the National Institute of Copyright, Marco Antonio Morales Montes.

Mexico is also asking for a discussion within the World Intellectual Property Organization about the issue, he added.

Artisan weavers like Marta Serna Luis, 58, hope the steps will bring them the recognition they are seeking.

“We must apply the law against the perpetrators of plagiarism. It’s theft,” she said.

Her Legacy: Suffragists at St. Cecilia

The paradox of fashion: can fast ever slow down? – The Drum

The Best Protection For Your Feet!