SHANGHAI, Nov. 24, 2021 /PRNewswire/ — On November , 2021, Aopeng Medical’s ALLVAS™ Endovascular Intervention Surgical Robot, successfully completed the first-in-human clinical evaluation of robot-assisted peripheral artery intervention of iliac artery in the Department of Vascular Surgery at Shanghai Changhai Hospital. The procedure was operated by Prof. Qing-Sheng Lu and his colleagues. The endovascular intervention surgical robot, combined with Digital Subtraction Angiography (DSA), precisely evaluated the target lesion and its location, and completed a refined operation process to better ensure the safety of the procedure, reduce iatrogenic injury, and reduce the incidence of complications and post-operative reintervention rate. The success of this first clinical trial marks a historic leap forward and the beginning of a new era of robotic-assisted peripheral artery intervention.

Effectively Filling the Gap in the Intervention Robot’s Market

The traditional surgical treatment has numerous side effects, such as high trauma, high risk, difficulty and multiple complications. In comparison, Aopeng’s endovascular intervention robot ALLVAS™, can achieve precise positioning through digital technology, which meets specific needs from the individual patient. It is also expected to reduce the radiation dose received by the operator by more than 90% and improve the precision of surgical manipulation, thus helping physicians to achieve higher efficiency and more satisfactory effects in clinical practice.

Vast opportunities of endovascular intervention robots in the long term

Peripheral vascular intervention is a minimally invasive endovascular procedure to treat occlusive and stenotic lesions caused by atherosclerosis of the extremities, which currently affects approximately 20 million people in China. With 2.3 million procedures performed annually worldwide, its medical device market is nearly $5 billion. In the future, the application of endovascular intervention robots in the field of peripheral vascular and venous interventional procedures is a promising development direction for the industry, both in Chinese and international markets.

Based on public data, the number of patients with peripheral vascular disease in China is huge. It equals to the sum of coronary patients and diabetic patients. The ratio of coronary stent and peripheral stent is 3:2 in foreign countries, whereas this ratio is 10:1 in China. According to this ratio, the market of peripheral artery stent is expected to reach the same size of coronary artery stent market. In China, patients with atherosclerosis of the extremities are not adequately treated. However, the basic routines of performing minimally invasive procedures have not changed substantially, and there are still two major pain-points in the industry, such as radiation exposure of doctors and difficulty in precise operation. The emergence of surgical robots realizes remote and delicate surgical operations, thus revolutionizes the minimally invasive endovascular procedures. In addition, by combining robotics and artificial intelligence technology, the long-term vision of AI diagnostics, AI design of surgical plan, semi-automatic and even fully-automatic surgical operation by robot will be feasible.

Aopeng Medical has applied for 36 patents for ALLVAS™ Endovascular Intervention Robot, which makes it reach the technological innovation summit and hereby establish its leading position in the endovascular intervention robot’s industry. 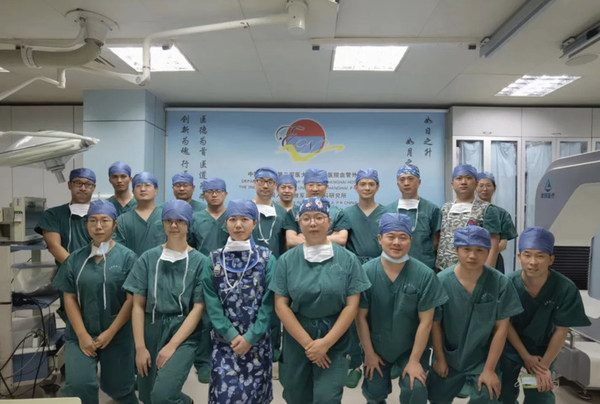 After the first clinical study, Aopeng Medical, together with Qing-Sheng Lu’s team and the Department of Vascular Surgery at Shanghai Changhai Hospital, celebrated the success of the first peripheral vascular stent intervention.

The 3 best ways to wear midi skirts in cold weather—and which ones to...

We found Nike for half off at the Nordstrom Cyber Monday sale—plus 15 other...

This scalp scrub has lifted not only my roots, but my entire view on...