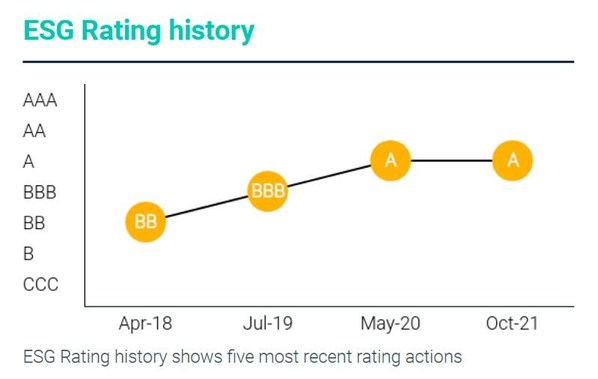 Reviewing the MSCI ESG rating changes of China Eastern Airlines in the past few years, its rating has made significant progress from BB in 2018 to BBB in 2019, and then to A in early 2020. The rating results signify that China Eastern Airlines has maintained its rating at A for two consecutive years after upgrading to A in early 2020, surpassing 64% of airlines worldwide.

As social responsibility has become a global consensus for corporate development in recent years, non-financial factors such as a company’s ability to govern and its impact on the environment and society have also received increasing attention from society and investors. ESG (Environmental, Social and Governance) is gradually taking shape in the mainstream development of the capital market with the promotion of organizations led by the UN PRI (Principles for Responsible Investment).

China Eastern Airlines has been adhering to high-quality and high-level information disclosure and active communication with stakeholders and has published CSR reports for 13 consecutive years since 2009. Meanwhile, China Eastern Airlines has strengthened the collaboration of multiple parties, made efforts to improve the operational efficiency of its aircraft groups, and explored new technological changes such as sustainable fuels and aircraft. From October 12, 2021, China Eastern Airlines operates the first carbon-neutral flights in China, eliminating millions of miles of carbon footprint in the air throughout the entire jet fuel life cycle from the oilfield to the sky. From December 1, 2021, China Eastern Airlines will also become the first airline in China to “fully digitize electronic invoices”. According to EBA’s calculation, 1 million pieces of paper invoices consume 400 trees, and China Eastern Airlines will realize the electronic system to reduce the use of paper by nearly 10 million pieces each year, which is equivalent to reducing the consumption of nearly 4,000 trees each year.

In the future, China Eastern Airlines will further integrate ESG concepts and measures into its daily operations, continuously improve its performance in all aspects of ESG, and explore a stronger development model with higher quality and sustainability to bring higher value to the development of society.

Spruce Up for Summer: Make Your Backyard the Perfect Outdoor Space

Students urge Plenary to not be swayed by fashion, crisis in faith formation –...