– Thunderbolt, Los Angeles, is named Campari One To Watch

LONDON, Dec. 8, 2021 /PRNewswire/ — The World’s 50 Best Bars 2021, sponsored by Perrier, was announced at a live awards ceremony on Tuesday 7th December in London, UK, where luminaries of the global cocktail scene gathered in person for the first time in over two years. The 2021 edition of the annual ranking features bars from 17 countries, with London’s Connaught Bar bagging the No.1 spot and picking up The World’s Best Bar and The Best Bar in Europe titles for the second consecutive year. 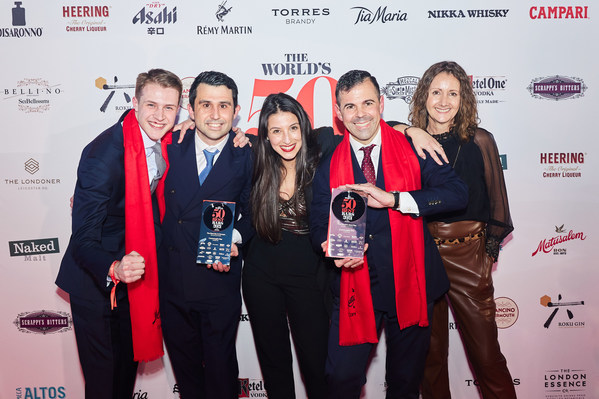 Under the masterful leadership of Agostino Perrone, Connaught Bar presents artful, modern drinks with graceful service in an elegant setting. Designed by the late David Collins, the Cubist-inspired bar is known for its unique Martini trolley, where bartenders give a highly personalised drinks experience to guests.

Other bars in the top five are fellow London destination Tayēr + Elementary (No.2), rising star Paradiso in Barcelona (No.3), Athens favourite The Clumsies (No.4) and the acclaimed Florería Atlántico in Buenos Aires (No.5). The full list can be viewed here.

Mark Sansom, Content Editor for The World’s 50 Best Bars, says: “Connaught Bar, we salute you – this award is testament to Ago Perrone and his team’s inherent hospitality and continued pursuit of excellence, encapsulated in the way they have modernised the Martini cocktail. We also send huge congratulations all the venues on the 2021 list of The World’s 50 Best Bars. It’s been another incredibly tough year for hospitality and the sector’s resilience and togetherness through these challenges is humbling.”

This is her year: Lizzo’s music career from dreamer to Grammy-nominated artist