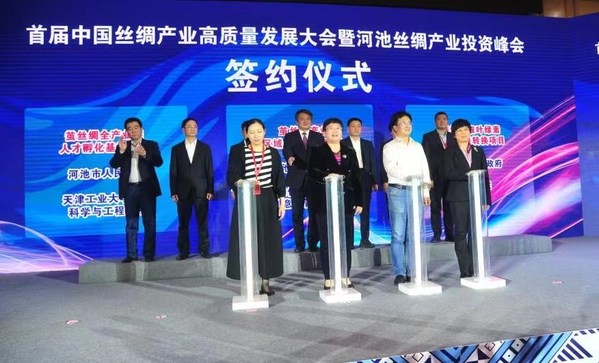 With the mulberry silkworm industry as a core of its agricultural sector, Yizhou is accelerating the industry radiation capacity for the sericulture industry. By far, 29 silk processing enterprises settled in Yizhou with white steam filature output capacity of 11,000 tonnes, accounting for 71.85 percent of Guangxi’s total. The district has ranked first among counties and districts in China in mulberry silkworm plantation areas for 16 consecutive years.

According to Guangxi Jialian Silk Company, a local silk processing enterprise, while supplying silk products to well-known international brands, the company is also devoted to maintaining communication with luxury brand suppliers and adjusting the product structure to meet the new demand for international silk products constantly.

According to industry insiders, enterprises from Italy, France, the United States, India, and other countries and regions also pay close attention to Yizhou’s silk products, who added that efforts should be further made to improve product quality control and sustainable development capabilities of Yizhou’s silk product.

The improvement of the industrial chain has injected vitality into Yizhou to enhance the gathering capacity of silk industrial clusters and accelerated the settlement and production of silkworm processing enterprises in the Yizhou District.

Qin Chuncheng, party secretary of the Hechi Municipal CPC Committee, said that Hechi city would prioritize promoting the construction of silkworm planting and breeding base as well as cocoon and silk processing demonstration park in Yizhou district to become China’s “New Silk Capital.”

Scientists are working on a “stress vaccine” that could help with PTSD and anxiety,...