HANOI, Vietnam, Dec. 19, 2021 /PRNewswire/ — On December 18th, Vietnam Airlines and SpaceSpeakers Group signed a cooperation agreement on joint development and cultural promotion for the period of 2021-2023. 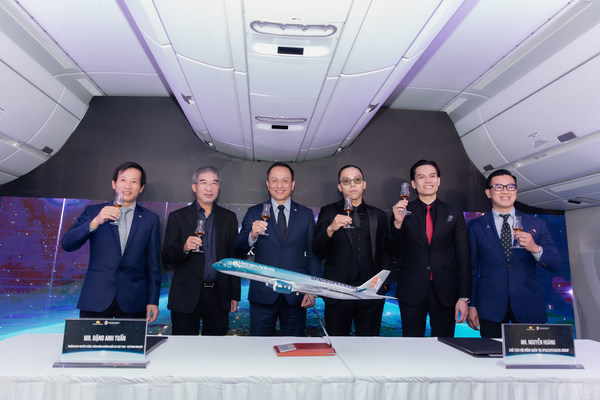 In this event, the signing minutes including 8 main articles were agreed and approved by both parties. Well-known artists under SpaceSpeakers Group such as Touliver, Binz, Rhymastic, SlimV, SOOBIN, Kien Ung appeared with manners, attended the front row and witnessed the important signing ceremony in Hanoi.

The agreement of the two giants in the aviation and music industries originates from the common inspiration called The Karman Line – the boundary line where the atmosphere and outer space intersect. This is also a symbol of the unprecedented cooperation between the heritage traditional values of Vietnam Airlines and the pioneering, modern and civilized spirit of the SpaceSpeakers Group. This is the first time that Vietnam Airlines has cooperated with an entertainment company in the strategy of spreading culture, and at the same time, innovating services and brand image to bring passengers a more modern and youthful experience.

Contributing to spreading the activities of the SpaceSpeakers Group in particular and the modern and civilized music culture of the young Vietnamese generation in general, Vietnam Airlines will display the SpaceSpeakers Group’s music materials on more than 100 aircrafts. This is also the first time that Vietnam Airlines has included the music video genre (Music Video – MV) in the entertainment treasures of its wide-body Airbus A350 and Boeing 787 fleet, in addition to hundreds of other diverse programs such as movies and TV shows,…

In the near future, Vietnam Airlines and SpaceSpeakers Group will also coordinate to organize and participate in events to promote each other’s culture, products and services, and at the same time deploy a number of activities to enhance the image of the two sides; such as launching co-branded inflight products, painting SpaceSpeakers Group images on Vietnam Airlines aircraft,…

Sharing about this agreement, SpaceSpeakers Group Chief Executive Officer Vu Ha Quan is beyond proud: “The strength of SpaceSpeakers is music and will always be music, this is also the core factor that creates the success of SpaceSpeakers. When we started the first steps in cooperation, we had limitless exchanges between artists, in order to research and create a special musical personality that, in the way we imagine, fits perfectly with Vietnam Airlines.“

More specifically, in this event, the famous Music Producer Touliver was officially announced as the President of SpaceSpeakers Group. Sharing about his new position, President Touliver said: “More than 10 years leading SpaceSpeakers in music has portrayed Touliver as a disciplined, strict and pioneer leader. At the present time, we are no longer looking for recognition, but instead, continue to dedicate ourselves and carry the responsibility of leading young generations on the path of artistic pursuit. In doing so, my role as president of the SpaceSpeakers Group will help strengthen my position and credibility in the music community.“

In the context where Vietnam is undergoing a strong transformation and redevelopment, the signed agreement between Vietnam Airlines and SpaceSpeakers Group is expected to inspire Vietnamese brands to join together and rise up, thereby contributing to the economic, social and cultural development of the country.

About Vietnam Airlines:
Vietnam Airlines is the key player in the air transport industry in Vietnam and Southeast Asia. In addition to the 4-star international service quality, Vietnam Airlines has a nationwide and transcontinental flight network, with a modern and world-class fleet of aircraft.

How to Find Presence in 5 Simple Steps