In the year of its 25th anniversary, a delegation of Menarini Fair Play Ambassadors was received in audience by the Holy Father in the Paul VI Audience Hall

VATICAN CITY, Dec. 23, 2021 /PRNewswire/ — This morning, in the solemn setting of the Paul VI Audience Hall, a delegation of Fair Play Menarini Ambassadors was received in audience by the Holy Father, bearing messages of hope, respect, ethics, and dedication to others, typical of fair play. 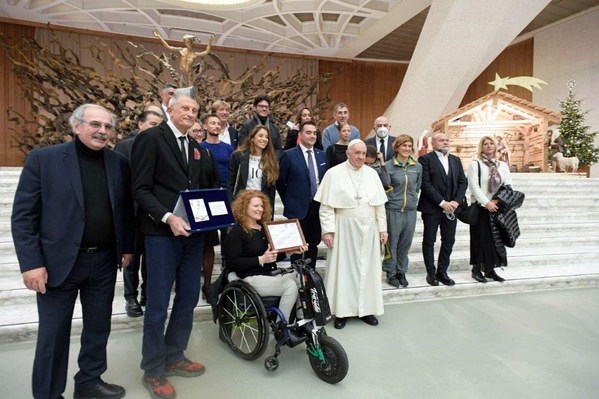 The Fair Play Award, committed to the common good of sport has, every year since 1996, acknowledged sportspeople and institutions from all over the world who have distinguished themselves for their ethics and contribution to society. Since the very first edition, award winners have also become Fair Play Menarini Ambassadors, representing the noblest values of sport and becoming positive role models and examples for future generations.

“Pope Francis teaches us every day the importance of values such as brotherhood, solidarity, and respect for others. Being received in audience by the Holy Father to acknowledge the healthy values of sport and life has been a precious gift for the Fair Play Menarini Ambassadors,” declared Lucia and Alberto Giovanni Aleotti, shareholders and members of the Menarini Board. “The words of Pope Francis, together with the examples set by the Fair Play Ambassadors, remind us all how the true champions in life are those who, even in the most difficult moments, rely on their dedication and talent, always respect the rules, and are willing to shake the hand of their opponents.”

Here below is the list of Fair Play Menarini Ambassadors and representatives present this morning:

Photograph attached to this press release:
All rights to this photo belong to © Vatican Media

How morning runs through cemeteries became my greatest stress reliever