Ms. Gao Yan, Chairperson of CCPIT, brought forward 3 suggestions in her remark, including supporting enterprises in the region to utilize the market-opening commitments while following the rules, so as to promote the high-quality development of trade and investment, improving the competitiveness of local manufacturing industry, and keep developing the supporting services for enterprises.

Guangxi is an enthusiastic participant and stakeholder of economic and trade cooperation between China and other RCEP countries. Mr. Lan Tianli, Governor of Guangxi, introduced that Guangxi’s trade volume with RCEP countries has increased by 3.4 times from US$ 8.8 billion in 2010 to US$ 39 billion in 2020. The RCEP region has become Guangxi’s largest overseas investment destination and the third-largest source of FDI. 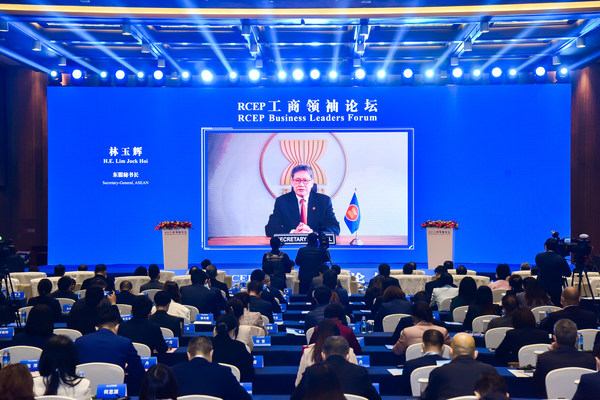 Mr. Lim Jock Hoi, ASEAN Secretary-General, said that RCEP is a catalyst for the region to bounce back from the economic fallout. It is therefore incumbent on us to make sure that RCEP serves its purpose, bringing prosperity to all.

Mr. Sinit Lertkrai, Deputy Minister of Commerce of Thailand, said in the video remark that Thailand and China can share the results of multilateral cooperation through RCEP, a multilateral cooperation system with the most structural diversity of members. Looking into the future, the implementation of RCEP will be the impetus for Thailand–China economic relations.

The RCEP Business Advisory Council and the Guangxi Chamber of International Commerce RCEP Enterprise Service Centers were launched during the forum. It is the first time that the Chinese commerce and trade promotion institution set up comprehensive enterprise service centers in RCEP countries. The centers aim to create a one-stop platform for trade and investment between Guangxi and RCEP countries, providing precise matchmaking services.

A series of achievements were released on the forum to facilitate the high-quality implementation of RCEP, namely the Business Community Initiative on Jointly Promoting the Regional Comprehensive Economic Partnership (RCEP) Cooperation and the e-Book on RCEP.

I Have Intrusive Thoughts, and I Spoke with 3 Mental Health Professionals to Learn...

Victoria’s Secret model Dilone on fashion, filmmaking and the future