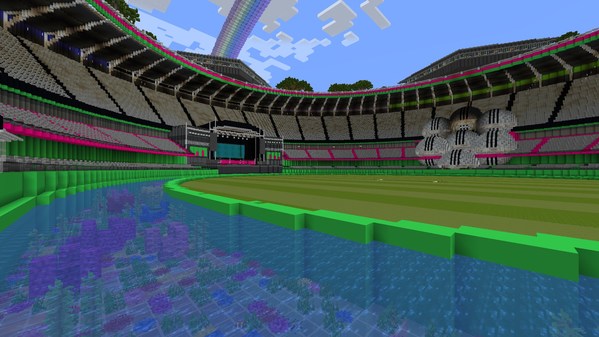 A boundary moat filled with sea creatures was a popular design element, inspired by Samuel, aged 12.

Minecraft-loving kids across the country were invited to take part in The Hundred’s ‘Every Block Counts’ competition, tasked with designing their ultimate cricket stadium experience with no limits on what it could contain.

The aspiring young Minecrafters’ entries were imaginative and the top 10 designs included everything required for the virtual stadium. Built in Minecraft space, the world features a see-through wicket, rollercoaster, rainbow arch, sea creature moat and rooftop nature garden. This is the first ever sports stadium built in the world-famous gaming platform through a kids competition.

The virtual stadium world is now open for everyone to explore and interact with on PC. To download the stadium visit www.thehundred.com/every-block-counts.

Winning Children and their Entries:

Commenting on the launch of the world, Issy Wong said: “We’ve seen submissions beyond our wildest expectations and the final build truly is a blockbuster cricket stadium. It’s been incredible to be part of this initiative; another first for The Hundred as it continues to push the limits in sport and entertainment.”

“As soon as I read the brief, I knew that I had to do something colourful. The arch over the stadium is a rainbow to celebrate diversity” said 12-year-old winner Thea. 8-year-old winner Rosie commented “In Minecraft your imagination can run wild! I’ve gone for sea creatures swimming around the pitch.”

The Hundred is back for its second year, with family-friendly blockbuster entertainment and fast-paced cricket. Men’s and women’s games kick off on the 3rd and 11th August. For more information, visit thehundred.com.