EZHOU, China, July 15, 2022 /PRNewswire/ — Huahu Airport in central Chinese province Hubei’s Ezhou City, the first professional freight hub airport in Asia and the fourth in the world, is scheduled to be put into operation on July 17. By then, departing from Ezhou, passengers and goods can reach the whole country overnight and reach overseas destinations in two days. 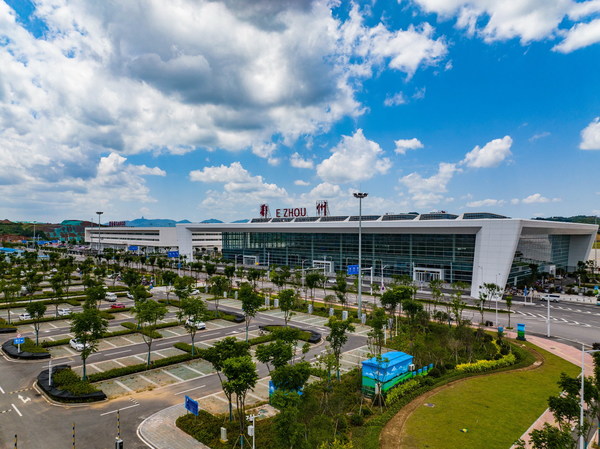 Ezhou Huahu Airport is positioned as a freight hub, passenger transport branch line, public platform and cargo navigation base. It took eight years for the airport to develop from preliminary planning in 2014 to completion and operation in 2022. The investment of the airport project totaled 30.842 billion yuan, and the project package consists of three parts: the airport project, the transshipment center and the SF airlines base project, and the oil supply project, according to Ezhou Converged Media Center.

In August 2015, Hubei international logistics central hub project was listed as the top project in the province. On September 17, 2020, Hubei and the Civil Aviation Administration of China held a working meeting in Wuhan. The two sides decided to jointly promote Wuhan Tianhe Airport to become an international gateway hub in the central region and Ezhou Huahu Airport to become a first-class aviation freight transport hub, forming a dual-hub for passenger and cargo aviation with the two airports in a bid to create “a going-out channel in the sky” in Hubei.

Ezhou Huahu Airport is designed to serve a passenger throughput of 1 million visits and a cargo and mail throughput of 2.45 million tons in 2025. The airport operation support level is 4E. In this phase, two long-distance parallel runways and taxiway systems will be built in the east and west. The runways are 3,600 meters long and 45 meters wide, with a runway spacing of 1,900 meters.

The test flight was carried out at the end of March, the airport was put into operation in the middle of July, and the cargo function will be fully opened at the end of November.

According to the Hubei International Logistics Airport Co., Ltd., after the airport was put into operation, the 1.5-hour flight circle can cover 90 percent of China’s economic aggregate and 80 percent of the population. Huahu Airport will open 7 routes and 9 destinations from Ezhou to Beijing, Shanghai, Shenzhen, Xiamen and Kunming in the initial stage of passenger transport.

For cargo transport, the airport will open domestic services first and then international services. Two routes from Ezhou to Shenzhen and Shanghai will be opened in the first phase. After the international cargo transport function is fully in operation, international cargo routes to destinations such as Osaka and Frankfurt will be opened. The airport will gradually grow into a world-class aviation freight transport hub, and strive to build a new logistics highland in China and even the Asia-Pacific region.

As a major national productivity project, Huahu Airport shoulders the responsibility of participating in the global aviation logistics competition on behalf of China, and is the most important project of Hubei Province, according to a senior official in Ezhou. After being put into operation, the airport will surely become the key support for Hubei to build a pioneering area for building a new development pattern in China.

IMHO: Taylor Swift appears to have discovered allyship—here’s what she (and other new allies)...

Hayley Kiyoko on how she’s normalizing queer love and confidence

The Fashion Industry Could Reduce Emissions—if It Wanted To – WIRED