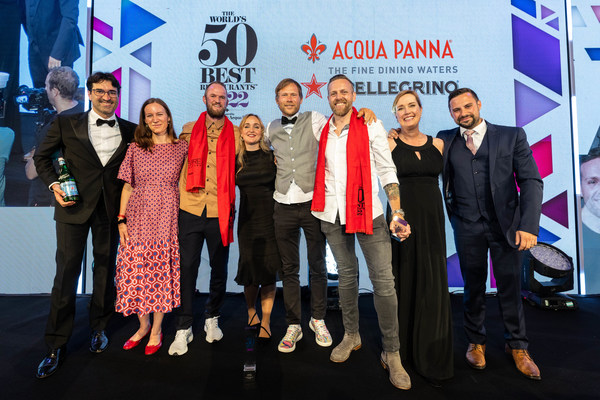 The crème de la crème of the world’s restaurant community gathered in London this evening to celebrate The World’s 50 Best Restaurants awards 2022, sponsored by S.Pellegrino & Acqua Panna. The awards ceremony, hosted by internationally renowned actor and gourmet Stanley Tucci, honoured gastronomic excellence from 24 territories across five continents before naming Copenhagen’s Geranium as The World’s Best Restaurant 2022 and The Best Restaurant in Europe 2022.

Taking over the No.1 position from Noma – which has been elevated to the Best of the Best hall of fame – Geranium, led by chef Rasmus Kofoed and sommelier Søren Ledet, was voted the No.2 restaurant in The World’s 50 Best Restaurants 2021 list. Geranium’s mission is to create food that awakens the senses, and Chef Kofoed’s meticulous cooking and incredible vision, including his recent decision to go meatless, have won accolades and fans worldwide. Geranium is joined in the top three by Central (No.2) in Lima and Disfrutar (No.3) in Barcelona.

Deep Longevity Selected by Kickstart as One of the Most Promising Start-ups in the World Discussing Proof of Concepts with Big Insurance and Health...

Shein is the new darling of China’s fast fashion industry — but at what...