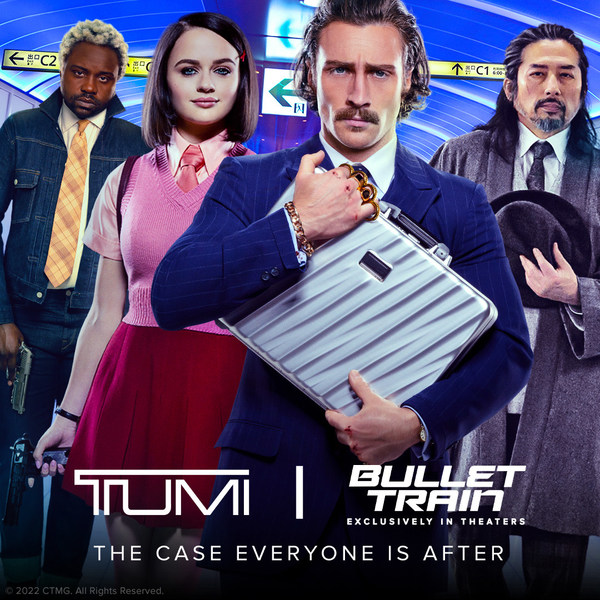 In Bullet Train, Ladybug is an unlucky assassin determined to do his job peacefully after one too many gigs gone off the rails. Fate, however, may have other plans, as Ladybug’s latest mission puts him on a collision course with lethal adversaries from around the globe—all with connected, yet conflicting, objectives— centering around the TUMI 19 Degree Aluminum Briefcase on the world’s fastest trains. The end of the line is just the beginning in this non-stop thrill-ride through modern-day Japan from David Leitch, the director of Deadpool 2.

Leading up to the film’s theatrical release in North America on August 5, TUMI will be debuting a collaboration with New York Times Advertising on a digital movie-themed crossword puzzle where U.S. residents, 18 years of age or older, will have the choice of completing the crossword puzzle for an engaging, interactive experience or directly entering the contest for a chance to win one of the sought-after limited-edition briefcases, sign-up here.  There will be 20 lucky winners randomly selected from those who enter the contest. TUMI will also be activating an integrated marketing program in connection with the world red-carpet premiere of the film as well as and a variety of digital and in-store activities to promote the film.

“There was only one luggage brand who had enough style to fit in with the film’s all-star cast as well as the durability that could go head to head with an ensemble of assassins on one of the world’s fastest trains and that was TUMI, which perfectly fits in with this edgy, action-packed film,” said Jeffrey Godsick, EVP of Global Partnerships and Brand Management and Head of Location Based Entertainment at Sony Pictures Entertainment.

Equally striking from a distance or at close range, the TUMI 19 Degree Aluminum Briefcase boasts a sleek, aluminum crafted exterior with bespoke design and durability top of mind. This limited-edition briefcase features a “Bullet Train” patch card pocket with “Bullet Train” logo in addition to a branded luggage tag. Through the TUMI “Bullet Train” collaboration, only 150 limited-edition briefcases will be available starting July 20th worldwide across select TUMI stores & TUMI.COM priced at US$1,795.00. For those unable to get one of these limited TUMI collector’s items, they can visit TUMI.COM to shop the full TUMI 19 Degree Aluminum collection, which is exceptionally striking up close or from a distance, super durable, and boasts a modern silhouette with fluid-looking, strategically contoured angles.

“TUMI is synonymous with quality durability toughness and is always looking to the future for inspiration. With this film, as the screen writers and director started laying out what the environment would look like and the types of pieces that would exist in the film, TUMI was at the top of their list. They looked to TUMI for a hero case to have all those qualities of durability, be able to surpass the battles that it would ensue throughout this epic journey,” said TUMI Creative Director, Victor Sanz.

ABOUT TUMI:
Since 1975, TUMI has been creating world-class business, travel lifestyle, and performance luxury essentials designed to upgrade, uncomplicate and beautify all aspects of life on the move. Blending flawless functionality with a spirit of ingenuity, we’re committed to empowering journeys as a lifelong partner to movers and makers in pursuit of their passions. The brand is sold globally in over 75 countries with upwards of 2,000 points of sale. For more about TUMI, visit www.TUMI.com. How Did Your Favourite Brands Score in This Year’s Ethical Fashion Guide? – Broadsheet

7 Secret Benefits of an Afternoon Nap