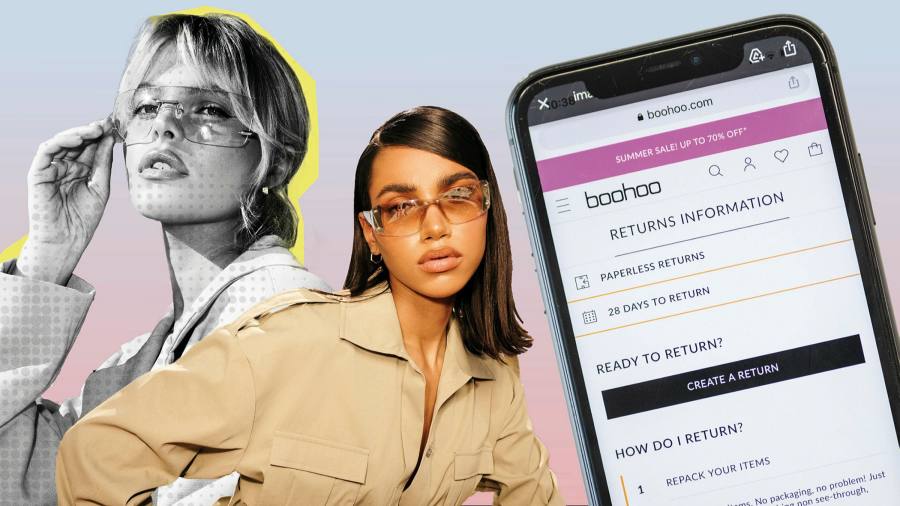 Fast fashion retailers are competing on a new battlefield: returns.

Boohoo last week joined Zara in charging for returns for the first time, as the industry moves to reduce the profit hit from customers sending back unwanted items.

Shoppers will now have to pay £1.99 to return goods bought from Boohoo and BoohooMan, although other group brands such as PrettyLittleThing and Nasty Gal are so far unaffected.

The change follows an earlier move by Spanish apparel group Inditex to levy a £1.95 fee on returned items from its brands, which include Zara, Pull & Bear and Massimo Dutti.

“It’s a brave move to try and change policy,” said Al Gerrie, founder and chief executive of ZigZag, a UK software company that helps process returns for dozens of retailers including Boohoo.

He pointed to research suggesting that three-quarters of consumers check a retailer’s returns policy before making a purchase, but added that since Zara started charging he had had “a lot of retailers coming to us asking how they can change their return policies”.

Free returns have been extremely popular with online shoppers but have come at a high price to sellers.

Gerrie said processing costs can range from just under £10 per item to around £20.

That includes the cost of checking — including the infamous “sniff test” for detecting whether it has been worn — cleaning, repacking and tagging the garment.

It also factors in hidden costs such as customer services contacts. “Every time someone calls or emails to ask ‘where’s my refund’, that interaction costs around £1,” said Gerrie.

The challenge of such costs on producers of low-priced clothing is clear.

In June, Asos warned that higher return rates would sharply reduce profits in the current year, sending its shares to their lowest level in more than a decade.

Boohoo’s finance director, Neil Catto, recently said group sales in the first quarter to the end of May rose 9 per cent before returns — but fell 8 per cent after returns were included.

Returns have always been more difficult and expensive to process than outbound orders, according to James Hyde, co-founder of James & James Fulfilment.

“With outbound picking everything is the same size and shape, it’s bagged, tagged and the whole process is easy to automate,” he said. But product comes back “in no particular order, it has no bar codes, it is very hard to predict or automate”.

The post-pandemic environment has amplified the problem. Prices for freight and labour have risen, while the number of garments being sent back has increased as shoppers have pivoted from relaxed-fit product lines to workwear and going-out clothes that require more precise sizing.

“As the cost of shipping has increased, we’ve had to look at where we can adapt without compromising what our customers love most,” Boohoo said last week. It added that the returns charge would allow it to “continue to offer great prices and products . . . in a more sustainable way.”

Environmental issues are also a big consideration, given that 10 to 25 per cent of returned items are believed to end up as waste, often in landfill.

There is tacit acceptance that retailers cannot do much to speed up return processing or make it cheaper. Hyde said for that reason “most technological innovation is focused on reducing returns rather than making the processing more efficient.”

Gerrie added that retailers were making more effort to “save the sale” by offering exchanges or refunding to gift cards rather than in cash. Products sold to overseas consumers were increasingly being returned and resold in those countries, rather than shipped back to the UK.

Chains with store networks are incentivising returns to shops. Around four out of every five items returned at Next go back to a store, which saves some transport and processing costs.

Some retailers are having to take more punitive action to reduce returns.

In 2019, Asos began sending warning letters to “serial returners” and reserves the right to suspend their accounts.

Gerrie said some retailers had stopped sending promotional emails to customers who return a lot of items.

But the ultimate curtailer of returns could be an economic downturn. Asos chief operating officer Mat Dunn told analysts last month that the company would soon know whether customers who were currently returning more items would end up just buying less in the first place as the cost of living hit.

What is trending in today’s (2020) kitchen lighting?

Fashion is getting faster and faster | Arts & Culture | dailyemerald.com – Oregon...

Your Work Week Style Guide: an Outfit for Every Day

Watch all the major fashion shows live from spring/summer 2020

Who is ready for Brisbane Fashion Festival 2022 – gcmag